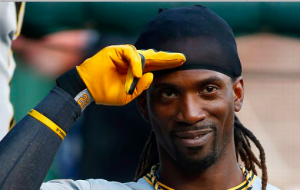 For a few days last week, Andrew McCutchen was the biggest name being thrown around on the baseball hot stove, as reports surfaced that the Pittsburgh Pirates were actively shopping him. However, when a trade with the Washington Nationals fell through and they went in another direction by trading for Adam Eaton, the Pirates were then forced to pivot and act as though they were content to retain McCutchen. Of course, while the Pirates may have preferred to trade McCutchen, at least for the right price, McCutchen himself is happy that he appears to be staying with the team.

Speaking at a public event on Saturday, McCutchen addressed the media for the first time since all the trade talk surfaced and confirmed that he’s happy not to be on the move. “If you would’ve asked me a week and a half ago or whenever that was, I would’ve said yeah,” McCutchen said. “I’m happy to be here, that’s for sure. It’s good to still be wearing black and gold.”

McCutchen, who has two years left on his contract before reaching free agency, reaffirmed on Saturday that he’d like to spend his entire career with the Pirates. “My dream is still to win multiple World Series. We all have those dreams,” he said. At the same time, McCutchen did admit that he was bothered by the trade talk. “Of course it did, I’m human,” he explained, as this was likely the first time in his career that McCutchen was the subject of serious trade talks.

The trade talk has since died down, and McCutchen says that in that time, he has spoken with Pirates GM Neal Huntington to help clear the air. “We had a good conversation,” McCutchen explains. “I do understand he has a job. I don’t understand what he has to do — I can’t empathize with that, just like he can’t empathize with the challenges I could be going through. We had a good conversation. We basically ended it on good terms.”

Of course, Huntington has left the door slightly ajar for McCutchen to be traded before the season. “Our intent coming in here was to have Andrew McCutchen be in our lineup going forward,” Huntington told reporters earlier this week. “No one changed that. It’s unlikely someone changes that going forward. We’re not going to close the door, but we’re not going to be making calls.”

There’s also a chance that McCutchen becomes the subject of trade talks again during the season. If the Pirates are not in position to contend at the top of the National League, especially if McCutchen has another subpar season by his standards, the Pirates could once again look to shop him around the league. But it seems like after the past week, McCutchen is better prepared to handle such a scenario if it should arise again. “Nothing’s going to affect me,” McCutchen said. “I’m ready to go. I’ve got thick skin.”