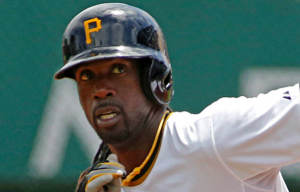 Pittsburgh Pirates outfielder Andrew McCutchen must have had one long offseason. If it wasn’t bad enough having to spend the winter reflecting on the worst season of his career, he was also the subject of trade rumors, forcing him to face the possibility of being shipped out of town. On top of all that, the Pirates announced earlier this month that they have realigned their outfield, moving McCutchen from his long-time home in center field to right field. All of that has McCutchen ready for spring training and eager to put everything behind him.

“Looking forward to just getting out on the field and playing. I know you’re all sick of hearing about everything that’s happened — and I am, too,” McCutchen told reporters on Friday. “I’m ready to get my feet out there. Ready to show that this is just the beginning of some good stuff.”

McCutchen admits that at one point he started to believe that he would actually be traded. From the outside, it also appeared that a trade involving him was close to inevitable. Nevertheless, the former MVP says he tried to take it all in stride, despite his desire to spend his entire career with the Pirates.

“It didn’t affect me in any way negative. I understand that all that’s a part of the game,” McCutchen said about the trade rumors. “You just have to accept that. It’s part of it.”

McCutchen knows that he could still get traded this season, especially if the Pirates aren’t in a position to contend by the time the trade deadline rolls around at the start of August. But he insists being traded is far from his mind.

“I’m trying to focus on right now. If I start thinking about everything else, I’m not going to focus on what’s in front of me,” said McCutchen. “Who knows what’s going to happen and transpire? We don’t know.”

However, McCutchen was a little less accepting when it came to the Pirates shifting him to right field to make room for Starling Marte in center field. McCutchen says the team never asked him to switch positions, despite an earlier promise that he would have a say when he ultimately moves out of center field.

“It was more, ‘This is something you have to do.’ It wasn’t an ask,” McCutchen explained. “It was more of (the team saying) that I have to move there and it’s for the betterment of the team. That’s one of the first times where that’s something I wanted to go against.”

McCutchen says he was hurt at first because he believes that at 30-years old he can still play center field at the major league level. However, after realizing that he had to be less selfish, McCutchen became more accepting of the move. He then realized that right field was the position played by Pirates legend Roberto Clemente.

“I’m playing at a position and a spot of a guy that you idolize: Clemente,” McCutchen said. “He set the standard for someone that I would love to be like, even half that guy. So it’s an honor to be out there playing that position.”

In between all the trade talk and position changes, McCutchen says he spent the offseason without a bat in his hands. Despite the worst offensive season of his career, he wanted to take a mental break from hitting. Instead, his focus this offseason was on trying to get stronger and faster. He hopes that approach will help him to bounce back from a rough 2016 season and re-emerge as one of the best outfielders in the game in 2017.

“That’s all I’m trying to do this whole offseason was to get myself back to where I was, and I feel like I did that,” McCutchen said. “I learned from it, took some good, took some bad, tried to make myself a better player.”