Another Blister Sends Rich Hill To the DL Again 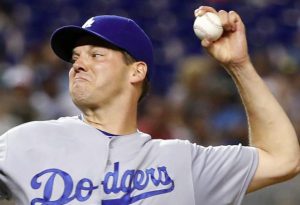 In a case of deja vu, the Los Angeles Dodgers have placed starter Rich Hill on the 10-day DL because of a blister on his left middle finger. Hill was plagued by issues with blisters last season and those same issues appear to have popped up again for him just one start into the 2017 season.

Hill first noticed skin irritation after completing the 5th inning of his start Wednesday against the San Diego Padres. He informed the team’s training staff and was immediately removed from the game after 75 pitches. In those five innings, Hill allowed just one run on two hits and three walks, striking out five.

Hill being removed from Wednesday’s game at the first sign of a blister and being placed on the DL two days later continues a trend of the Dodgers being conservative when it comes to Hill’s health. Last September, Hill was removed from a start after seven innings despite holding onto a perfect game because of concern about him developing a blister.

However, after all the problems Hill has had in the past, he understands that leaving Wednesday’s start and going on the DL may be necessary to prevent a bigger problem that could keep him on the shelf for an extended period of time later in the year.

“It was more of the beginning stages of something,” Hill said about the blister that’s sending him to the DL. “Last year, not realizing where it was going to end up, if I had known, I probably would have taken more time off.”

Dodgers manager Dave Roberts says that blisters weren’t an issue for Hill during spring training, and so he’s puzzled as to why it has popped up as an issue now.

“I don’t know if it was a little deviation in his pregame (routine),” Roberts said. “The pitch count has been there so it’s not a pitch-count thing. So we really don’t know but we’re trying to dig into the cause.”

Going forward, Hill says he plans to throw less in between his starts in hopes of limiting the irritation on his skin. He believes a 40-pitch bullpen session he threw prior to his start on Wednesday contributed to the blister on his finger. However, Hill also believes that his command of his curveball improves the more he throws, and so there could be a trade-off if Hill decides to throw less between starts.

With Hill going on the DL, the Dodgers have called up Josh Fields, who will pitch out of the bullpen. Hill was scheduled to start on Monday against the Cubs. Alex Wood, who was the odd man out of the starting rotation after spring training, is the most likely candidate to start in Hill’s place Monday. Ross Stripling is another candidate, depending on how he and Wood are used out of the bullpen when the Dodgers play three games with the Rockies this weekend.

Both Hill and the Dodgers are understandably frustrated at the lefty going to the DL with another blister-related issue, especially after he missed more than a month last year with the same issue. However, the move is mostly a precaution, as the Dodgers are hopeful Hill will only miss one start before he’s ready to return. Nevertheless, it is disheartening for the Dodgers to lose Hill to the DL so early in the season with yet another blister issue.