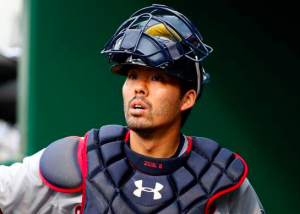 The Atlanta Braves have made several moves this offseason to strengthen their pitching staff, and on Saturday they made a move to shore up the other half of their battery. Atlanta has agreed to a one-year deal with veteran catcher Kurt Suzuki. The deal is pending a physical, but comes with a base salary of $1.5 million. Suzuki can earn an addition $2.5 million in bonuses based on playing time.

Suzuki has long been a reliable backstop, even as the 33-year old begins to show signs of aging. He’s coming off a solid offensive season as a backup catcher with the Minnesota Twins in 2016, hitting .258 with eight home runs and 24 doubles. However, the Twins made little effort to re-sign Suzuki after three seasons with the team.

The plan in Atlanta appears to have Suzuki take hold of the backup catcher job, although there’s a chance he could push Tyler Flowers for the starting job. Flowers was a productive offensive player in 2016 during his first season with the Braves, hitting .270 with a .777 OPS. However, the 30-year old Georgia native was limited to just 83 games because of injuries. Fear over Flowers being able to stay healthy may have pushed the Braves to sign Suzuki as an insurance policy.

Before adding Suzuki, the Braves already had two catchers on their roster who were ready to battle for the backup job during spring training in Anthony Recker and Tuffy Gosewisch. Recker had a strong offensive showing in 33 games with the Braves last season, although that was out of character for the 33-year old backstop who is known more for his defense. Gosewisch is another journeyman catcher who brings little offense to the table. Suzuki is undoubtedly a more dependable backup for the Braves.

One caveat of Atlanta’s catching situation is that they will need someone who can catch knuckleballer R.A. Dickey. Josh Thole, who remains a free agent, has caught Dickey for much of his time with the Mets and Blue Jays. The signing of Suzuki makes it unlikely that the Braves will add Thole late in the winter to catch Dickey. Whether Suzuki can catch a knuckleballer like Dickey remains to be seen, but it’s likely that Atlanta considered this before signing him.

The addition of Suzuki will also all but eliminate the possibility of the Braves signing free agent catcher Matt Wieters. There was much speculation that Atlanta would attempt to sign the Georgia native, who remains unsigned less than a month before the start of spring training. The Braves were once considered among the favorites to land Wieters, but with Flowers being the favorite for the starting spot and the Braves signing Suzuki, there doesn’t appear to be room for Wieters.

Obviously, the signing of Suzuki is not going to move the needle much, but it will help to solidify Atlanta’s catching situation. The Braves don’t appear to be on the same level as the Mets and the Nationals in the NL East, but they do have hopes of staying competitive in 2017, and adding a proven major league caliber catcher like Suzuki should prove helpful this season.