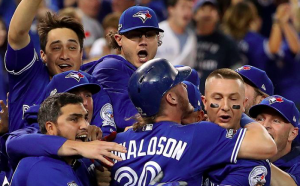 For the second straight season, the Toronto Blue Jays will play in the ALCS. Josh Donaldson raced home from second base on a double-play that was not turned to score the winning run in Game 3 Sunday night, giving the Blue Jays an exhilarating 7-6 walk-off win in the 10th inning and a three-game sweep of the Texas Rangers. Toronto is now 4-0 in the postseason after just barely sneaking into the playoffs on the final day of the regular season and then beating the Baltimore Orioles in the wild card game. They now await the winner between the Cleveland Indians and Boston Red Sox.

“It was definitely fun to be part of a series where the fans are just as involved as we were, given the history that we have with them,” said catcher Russell Martin, referring to the tension between the Blue Jays and Rangers that began last postseason after a Jose Bautista bat flip. “We didn’t really let it get to us. We played good, clean baseball. There wasn’t any bad blood — we just played better and got victories.”

Following that bat flip and Toronto’s win over Texas in last year’s ALDS, the matter between the teams was escalated in May when Texas pitcher Matt Bush hit Bautista with a pitch during a game. Bautista then proceeded to slide hard into second baseman Rougned Odor, who quickly threw a punch at Bautista, causing a benches-clearing brawl between the two teams.

Ironically, Bush and Odor were in the middle of everything when the Blue Jays scored their game-winning run on Sunday. Bush was on the mound and got into trouble after allowing a double to Donaldson, which then forced the Rangers to intentionally walk Edwin Encarnacion. After Bautista struck out, Martin grounded to short on a potential double-play, but the relay throw from Odor was wide of first, prompting Donaldson to sprint home and score the winning run before the Rangers could throw him out.

“The deciding factor was that once I saw the ball get away from him, I felt like I had to take a chance,” Donaldson explains. “In that situation, if he ends up throwing me out, you kind of have to tip your cap to him. But I was banking on the fact that I’m going to make it more times than not.”

“That game-ending play, that’s not a normal big league type of ending to a game,” said Toronto manager John Gibbons after the game. “That’s kind of rare. But a lot of times when things are going your way, that’s the kind of thing that happens.”

Regardless of whether the series between the Red Sox and Indians ends in Game 3 on Monday or lasts five games, the Blue Jays already know they will begin the ALCS on Friday as the road team. That means a four-day layoff for Toronto, but that doesn’t appear to be a concern for the Blue Jays, who have plenty of time to set up their rotation. There are also lingering questions about the health of Roberto Osuna, Francisco Liriano, and Devon Travis, three players who will undoubtedly benefit from added rest.

The Blue Jays lost last year’s ALCS to the Kansas City Royals in six games, but they will now get another chance at winning their first American League pennant since 1993. After an impressive sweep of the Rangers, there’s an argument to be made that the Blue Jays should be considered favorites against either Boston or Cleveland, as the Blue Jays appear to have plenty of momentum and confidence heading into the ALCS.