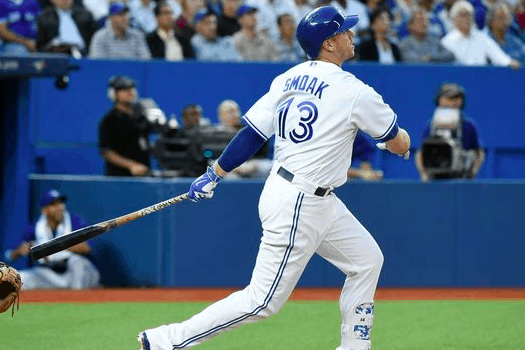 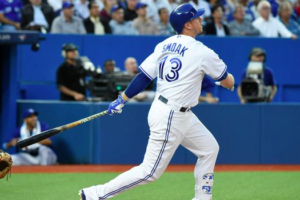 The Toronto Blue Jays announced Saturday that they have signed first baseman Justin Smoak to a two-year contract extension. Smoak, who is making $3.9 million this year, would have been a free agent after the season. Instead, he will stay in Toronto and make $4.125 million in 2017 and 2018, with a $6 million club option for 2019. He joined the Blue Jays in 2015 following four and a half years with the Seattle Mariners. He made his big league debut in 2010 with the Texas Rangers before going to Seattle in a trade involving Cliff Lee.

Smoak is hitting .234 with nine home runs this season. His OPS sits at .735, which is down from last season, but higher than nearly every season he was in Seattle. He has been Toronto’s primary first baseman this season, although at time the switch-hitting Smoak has shared first base duties with both Edwin Encarnacion and Chris Collabello.

Signing Smoak to an extension all but locks him into being Toronto’s primary first baseman for the next two years. This makes it worth noting that if Encarnacion or Bautista were to signed to long-term extensions after the season, both would candidates to be designated hitters while also seeing time at first base. The Blue Jays locking in Smoak at first base for another two years could be a sign that the organization is uncertain at best that either Encarnacion or Bautista will return after the season.

Two more players who may factor into the equation at first base are Chris Colabello and prospect Rowdy Tellez. Colabello is set to return from an 80-game PED suspension soon and could split time with Smoak for the rest of the 2016 season, and potentially beyond. Meanwhile, Tellez is having a breakout season at double-A, particularly from a power perspective, hitting 13 home runs and 18 doubles thus far in 2016. He could possibly be an alternative to Smoak at first base as early as this time next year. Of course, he may not have factored into Toronto’s decision to extend Smoak if the Blue Jays made the move to ensure they had coverage in case Encarnacion, Bautista, and Saunders all leave this offseason.

How the extension for Smoak will impact Toronto’s offseason plans remains to be seen, but it’s hard to believe they would have been so eager to keep him around if they thought there was a good chance the likes of Encarnacion, Bautista, and Saunders would return next season. If anything, it reinforces the urgency the Blue Jays have this season to return to the postseason and make another deep October run, because significant changes to the roster could be coming soon.