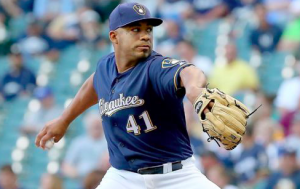 It only took one game (well, less than a game, really), for things to turn south for the Milwaukee Brewers in 2017. On Tuesday, the Brewers announced that ace Junior Guerra, who started Monday’s season-opening loss to the Colorado Rockies, will be out for four to six weeks because of a strained calf he suffered while running out a bunt during Monday’s game. The injury is a huge loss early in the season for a rebuilding Milwaukee team that is likely to struggle to stay competitive in the NL Central even when fully healthy.

The 32-year old Guerra had a long road to the big leagues, one that includes more than half a decade pitching in independent ball. However, he finally made his big league debut in 2015 and was one of the best stories in baseball in 2016, making 20 starts for the Brewers, going 9-3 with a 2.81 ERA. That performance helped earn him the honor of being Milwaukee’s opening day starter this year. Unfortunately, that start only lasted three innings before the calf injury forced him to be removed.

The Brewers were quick to place Guerra on the 10-day DL as a precaution, as he was seen walking on crutches following Monday’s game. However, simple caution has turned into a long-term injury. After Guerra underwent an MRI on Tuesday, the club announced he would be out four to six weeks.

Brewers manager Craig Counsell offered a slightly more pessimistic viewpoint, calling the injury “significant,” and commenting that Guerra would miss at least six weeks. That timeline would keep him on the shelf until at least the middle of May, possibly longer if he ends up making multiple minor league rehab starts before being activated from the DL.

The Brewers were already forced to begin the season without Matt Garza, who figured to join Guerra at the top of Milwaukee’s rotation. Garza was placed on the DL with a groin strain last week. The team doesn’t believe his injury is too serious, but they aren’t expecting him back until late April or early May. With Guerra joining him on the DL, Milwaukee’s rotation depth is being tested far earlier than the Brewers would have liked.

The Brewers have called up lefty Brent Suter to take Guerra’s spot on the roster. Suter, who attended Harvard, posted a 3.32 ERA in 14 appearances, including two starts, with the Brewers last season.

Suter will pitch out of the bullpen with Tommy Milone taking Guerra’s spot in the rotation. Milone threw two innings in relief of Guerra on Monday, surrendering two runs. He’s spent most of his career as a starter, experiencing varying levels of success. In 12 starts and seven relief appearances with the Minnesota Twins last year, Milone posted a 5.71 ERA.

Obviously, going without both Guerra and Garza for the first month or more of the season was not in Milwaukee’s plans. If fully healthy, the Brewers have a chance to put together a solid rotation, but it’s difficult to envision that being the case while Guerra and Garza are out. The Brewers were not expected to compete this season, and the injury to Guerra on opening day will make things that much harder for the Brew Crew.