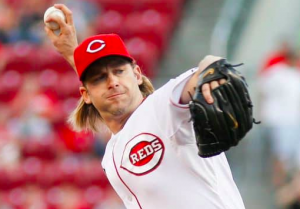 It’s been more than two years since veteran pitcher Bronson Arroyo has thrown a pitch in the majors. Over those two years, there were moments when it looked like his career was over. But Arroyo, who will turn 40 by the end of the month, is taking one last shot at pitching in the big leagues. On Thursday, Arroyo passed a physical and will now sign a minor league contract with the Cincinnati Reds with an invitation to spring training, giving him one last chance to pitch in the majors.

Arroyo left Cincinnati following the 2013 season, signing a two-year deal with the Arizona Diamondbacks. However, in June of 2014, he was sent to the DL with elbow trouble, the first time in his career he went on the DL. Less than a month later, he underwent Tommy John surgery. While recovering from Tommy John, Arroyo was traded twice during the summer of 2015, ultimately ending up with the Dodgers, who declined his option following the 2015 season, making him a free agent.

In 2016, Arroyo signed a minor league deal with the Washington Nationals, but managed just 9.2 innings over two starts in the Gulf Coast League before he was sidelined with elbow pain. He received stem cell injections in August, but wasn’t able to return to the mound before the end of the season, at which point the Nationals released him.

Now Arroyo is coming back to the Reds and ready to give it another shot. He says his elbow has been pain free since December and he’s eager to see how it responds once spring training gets underway. “I couldn’t sit here and say I will be over the hump now,” says Arroyo. “That’s what Spring Training is going to be for — to see how much my arm will take.”

When Arroyo gets to camp, he’ll likely find himself competing for the final spot in Cincinnati’s rotation, an opening created by the Reds trading Dan Straily to the Marlins last month. He’ll be competing against several of Cincinnati’s young pitchers, including Amir Garrett and Robert Stephenson, both of whom are ranked among the top 100 prospects in baseball, according to MLB.com. However, his past with the Reds makes Arroyo quietly confident that he can earn a spot in the rotation.

“I think if I’m healthy, I can make the club, especially this club. I went eight years and gave them 105 wins,” Arroyo said. “I don’t think I’m in a position for people to tell me that I don’t have good enough stuff to get people out in the Major Leagues. I think the hitters will let me know that.”

Speaking of hitters, even after two years without facing major league hitters, Arroyo says he won’t be intimidated. “Getting big-league hitters out, I’ve been doing that for a long time,” he says. “There’s nothing new here. They didn’t create a new species of hitter since the last time I stepped on the hill. I’m not worried about that at all.”

Before undergoing Tommy John surgery more than two years ago, Arroyo was one of the most durable pitchers in baseball. From 2005 to 2013, he made at least 32 starts and pitched at least 200 innings every year (except for pitching 199 innings in 2011). If his elbow is indeed healthy, it’ll be fascinating to see if Arroyo can be the pitcher he once was and earn a spot on Cincinnati’s opening day roster.

No matter the outcome, Arroyo seems happy to be getting one last chance to prove himself. “This could be a springboard for me to have another two or three years here or somewhere else, and make good money again,” Arroyo says. “This also could be, ‘Hey man, it’s your last spring training.'” Stay tuned.