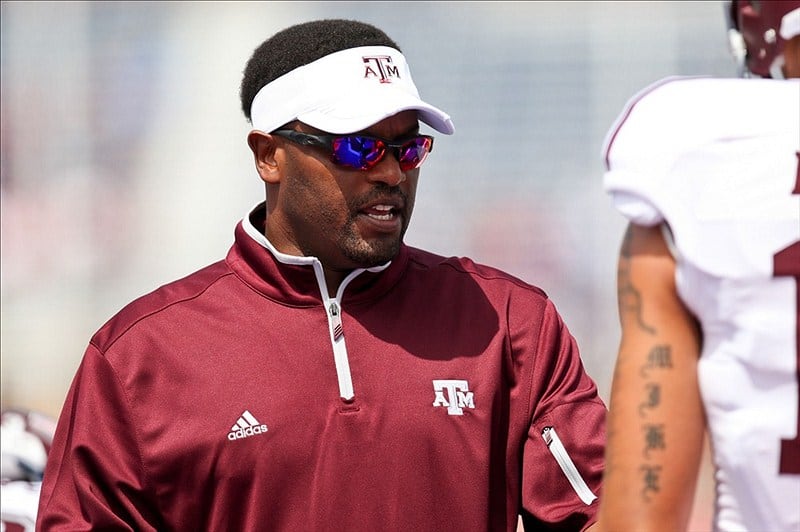 Texas A&M head coach Kevin Sumlin is no stranger to controversy. He’s had to deal with the circus that surrounded Johnny Manziel. Then there was a span of time where it seemed like every time you turned your computer on another Aggie football player was getting arrested. This offseason he had to deal with a pair of star players transferring, but otherwise, things were good as far as the players were concerned.

It was his coaching staff that embarrassed the program this time.

The first incident involved wide receivers coach Aaron Morehead. After Tate Martell had decided to open his recruitment back up, Morehead made some unfortunate comments on Twitter that were clearly directed at Martell. He tried to claim they weren’t, but no one bought it.

As a result, the Aggies ended up losing a wide receiver recruit as well, and another decided to eliminate Texas A&M from his list of choices. If that wasn’t bad enough, Morehead continued his Twitter tirade with more ill-advised statements (SportsDay).

While that looked bad, no one will remember it when the season starts thanks to what another pair of assistants did recently. For some incredibly stupid reason, a couple of assistants thought it would be funny if they created a bunch of slides for an event geared towards female fans that were extremely sexist and offensive.

What did they do? Well—they thought it would be funny to come up with their own version of the Aggie War Hymn (HoustonChron):

We are Aggie women
We are filled with estrogen
Hullabaloo, canek, canek, and back again

We are Aggie women & this is our song
Come on…bring it on…no more thong
Hullabaloo..caneck..caneck..and so on

Their idiocy didn’t end there. For some slides that were meant to teach the do’s and don’ts of pass blocking and run blocking they decided to get a little sexual.

For the don’ts of pass blocking the slide said:

For the do’s it read:

Really—how stupid must these guys be to think this was okay? The run blocking do’s and don’ts were not any better. For the don’ts:

The two responsible for this mess are offensive line coach Jim Turner and tight ends coach Jeff Banks. The university has suspended them for two weeks without pay and will require them to do 20 hours of community service.

The two issued an apology, but what they should be doing is thanking Kevin Sumlin for not firing them, especially Turner. Turner should feel so lucky and grateful he has a job, doing something this stupid should have never entered his mind. He was the offensive line coach for the Miami Dolphins during the whole bullying scandal a couple of years ago. According to the Wells Report, Turner fostered an environment that encouraged a few players to bully another. He was subsequently fired by the Dolphins (PFT).

He was out of football for the last two years and still would be if he hadn’t gotten the call from Texas A&M. Apparently, losing his job did not teach him anything. With his track record, he should have lost it again.

Kevin Sumlin has been criticized for not letting players go after they got into legal trouble, but his reason for not doing so is pretty sound. Rather than kick a young player off the team that clearly needs structure and discipline, he prefers to try and provide some and give him a chance at redemption. In the process, they may screw up again, but if they were left to their own devices after the first mistake, the second could have been even worse.

It may take them awhile to realize it, but once a player believes football could be taken away forever, it is surprising what he is capable of doing to make sure he doesn’t lose it. Not every player will turn it around when faced with the possibility, but many will. They just need to be given another chance–which Sumlin does.

Adults, on the other hand, are a different matter. They should be able to act like professionals and not ill-mannered children. They should not have to be told that getting into a war of words on Twitter is not a good, idea or that sexist jokes are not going to be found humorous by a room full of women (or men).

Sumlin shouldn’t have to be on top of his coaches or athletes every second of the day, but he is responsible for them. What they do is a reflection on the program and him as well as the University. No school wants to be associated with athletes that keep getting in trouble with the law or coaches that bullies kids online or create sexists presentations for a room full of women.

A major university like Texas A&M will only handle being embarrassed for so long.