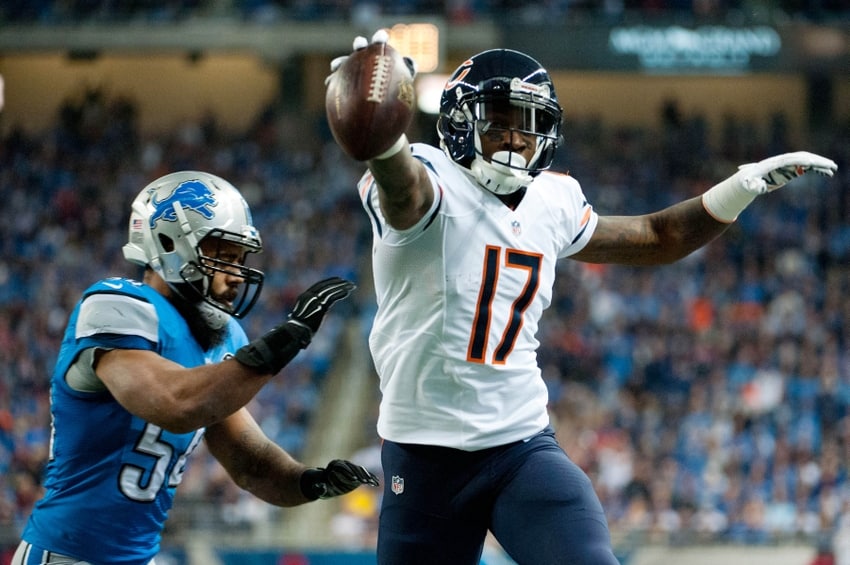 Next season is a big one for Chicago Bears wide receiver Alshon Jeffrey. He is going to be in a position to do something every player dreams of doing during their career—control their future.

The Bears liked what they have seen in him enough to put the franchise tag on him, but not so much that they were able to sign him to a long-term contract before last Friday’s deadline.

They had to like what they saw in him during the 2013 (89 receptions, 1421 yards, seven touchdowns) and 2014 season (85 receptions, 1143 yards, ten touchdowns). However, at the same time, they don’t like his injury history. He only played in ten games as a rookie and nine games last season.

Jeffrey felt like he has played well enough to deserve top five receiver money; the Bears were afraid he might not be on the field enough to prove he deserves it. So next season he will have to play under the franchise tag; a one-year contract for a guaranteed $14.599 million—and it’s the best thing that could have happened to him.

No one likes to play on a one-year contract because there is no job security, and it especially sucks for someone who perceived as ‘injury prone.’ However, it will give Jeffrey the chance to prove to the Bears and every other NFL team that not only can he be a No. 1 receiver, but that he is not afraid to do what it takes to make the plays.

Doing so will mean he will have to put himself in positions that may result in injury, but no one wants to pay a guy $14 million a season that plays not to get hurt. Teams want to see him produce like he did in 2013, play with no fear, and play in all 16 games.

Should he do that, his future will be entirely in his hands. He will be able to dictate how much he gets paid and—even better—where he plays (to a degree, of course).

If he produces and does not get hurt, Chicago will make him an offer, but more importantly, so will several other teams. This time around, since the Bears are unlikely to hit him with the franchise tag again, he will get to see how other team’s value him.

Any team with the cap space to make him an offer is going to do so. Not only will he get the chance to get paid, but he will get the opportunity to play with a better quarterback than Jay Cutler.

So if Jeffrey wants to get paid and wants to play with a better quarterback than Cutler all he has to do is stay healthy and play like the kind of receiver he thinks he is.