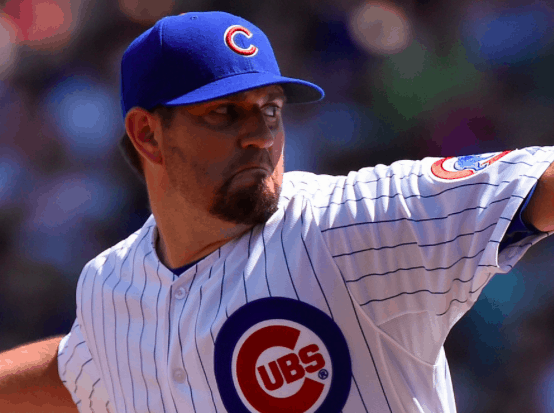 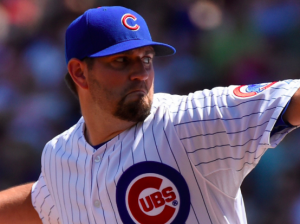 In a rather surprising move, the Chicago Cubs have decided to decline the option on starting pitcher Jason Hammel for 2017. Rather than pay him $12 million to return next season, the Cubs are paying Hammel a $2 million buyout that will make him a free agent. Hammel won 15 games a posted a 3.83 ERA in 2016, which makes the move a surprise. However, one source has reported that the Cubs gave Hammel the choice of returning or testing free agency, and Hammel chose to become a free agent.

“I want to thank Jason for all of his contributions in his almost three seasons as a Cub,” Cubs President Theo Epstein said in a statement. “He was an effective, reliable starter the entire time he was a Cub, and this year he was an integral part of one of the best rotations in club history. We would not have been in a position to win the World Series without Jason’s terrific performance during the regular season.”

The fact that the Cubs declined his option instead of picking up the option and trying to trade him indicates that the club did leave the final decision up to him. “When we agreed with Jason on this two-year contract back at the 2014 winter meetings, the option was included with the intent that it would be exercised if Jason was going to be a Cub in 2017,” explains Epstein.

“The intent was never to exercise the option and then trade Jason, so we will not consider that path. Instead, Jason will have the opportunity to enter free agency coming off an outstanding season and the ability to choose his next club. Meanwhile, the organization gains some flexibility and the opportunity to use a rotation spot to develop a younger, long-term starting pitcher.”

Being the team’s fifth starter in 2016, Hammel was not utilized during the postseason. With Jon Lester, Jake Arrieta, John Lackey, and Kyle Hendricks all under contract for next season, Hammel would have continued to be Chicago’s fifth starter had he returned to Wrigley Field next season. Instead, the Cubs may look to Mike Montgomery to take over Hammel’s spot in the starting rotation next year.

Montgomery started five games for the Cubs this year, but he spent most of the season, including the playoffs, in the bullpen after being acquired from the Seattle Mariners mid-season. The lefty started 16 games with the Mariners in 2015, going 4-6 with a 4.60 ERA, including two complete game shut outs, so moving him into the rotation should not be a huge adjustment.

As for Hammel, he joins what most consider to be a rather weak free agent class for starting pitchers, which is why hitting the open market is the best move him personally. Outside of Rich Hill, there’s an argument to be made that Hammel is the best starting pitcher available this winter. Even at age 34, Hammel is poised to score a lucrative multi-year deal after posting an ERA under 4 in four of the last five seasons. Hammel will be free to sign with any team starting Tuesday.