Cincinnati Bengals At Dallas Cowboys Recap—Yes, The Cowboys Actually Had A Pass Rush

But while a 3-1 record is good, the ‘Boys had yet to beat a truly competitive team leaving some to wonder whether they really could. They needed a statement win and got the chance to make one against the Cincinnati Bengals. 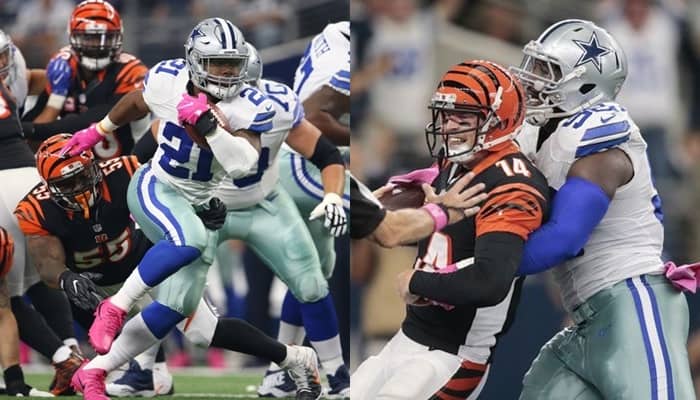 For Dallas fans, the concern heading into the game was not whether the offense could handle the tough Bengals defense. Yeah, they would love to have Dez Bryant in the game, but his fractured knee kept him out again. But they did fine without him last week. Surely they could do so again this week.

The problem Dallas fans expected was the same one they have been facing every game this season—the defense, especially the pass rush, is terrible. The idea of going up against the top passing team in the AFC was certainly not appealing. It wasn’t hard to imagine Andy Dalton and A.J. Green taking their sweet time carving up the defense.

Then the game started, and the craziest thing happened. The Dallas defensive line actually put pressure on Dalton! In the first four games of the season, they recorded just six sacks but were able to drop Dalton four times and recorded nine hits on him. They kept Dalton on the run for most of the game and rarely allowed him to set his feet and throw.

The Dallas defense even appeared as if it might pitch its first shutout of the season and first since the defense recorded consecutive shutouts over Washington and Philadelphia to close the 2009 regular season. But then Dalton led the Bengals on a pair of long touchdown drives (10 plays, 59-yards and 12-plays, 77-yards) in the fourth quarter to make the final score look much closer than the game was, 28-14.

So is the Dallas defense better than advertised or was there success more a product of a weak Bengals offensive line? Well—that’s not as easy to answer. The Bengals ae one of the better offenses in the league (8th overall; 4th passing, 23rd rushing).  However, their success is more a product of Dalton and the skill position players and not the offensive line. With the four sacks they allowed Sunday, only the Indianapolis Colts line has given up more (20). They rank 15th in hits allowed with 27 (NFL).

The Cowboys defensive line production is in line with what other teams have done, but the credit can’t go entirely to the defensive for their own success. Dak Prescott, Ezekiel Elliot, and the rest of the offense deserve a little for scoring touchdowns on their first three drives and forcing the Bengals to play catch up.

It certainly doesn’t hurt when your running back averages 8.9 yards a carry, your quarterback completes 75 percent of his passes, and all of the receivers that caught more than one pass averaged at least 10 yards a catch. The Dallas offense isn’t making a lot of big plays (with the exception of Elliot’s 60-yard run), but it is playing efficient, time-consuming, and productive ball.

It’s also worth noting that Andy Dalton still had 303 yards of offense on the day (269 passing, 34 rushing) (ESPN). The Bengals were able to move the ball, but the Dallas defense was able to shut them down and force them to punt.

So maybe the defense doesn’t stink…

They will certainly be tested next week when they travel to Wisconsin to take on the Green Bay Packers. Cincinnati will have the unenviable task of righting the ship against Tom Brady and the New England Patriots.