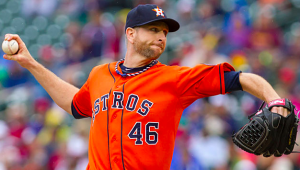 The Cincinnati Reds have signed veteran pitcher Scott Feldman to a one-year deal. The Reds formally announced the deal Thursday morning. Feldman will make a base salary of $2.3 million with the chance to make an additional $2.2 million in incentives. The signing of Feldman comes one week after the Reds traded starter Dan Straily to the Miami Marlins for a trio of prospects.

Reds GM Dick Williams said earlier this winter that the team was hoping to add a veteran pitcher with the flexibility to work as both a starter and reliever. Feldman appears to fit the bill perfectly. He brings more than a decade of big league experience, breaking into the majors with the Texas Rangers in 2005. Since then, Feldman has made 183 starts and 138 relief appearances for five different teams.

Feldman began the 2016 season as a starter with the Houston Astros. Despite getting off to a solid start, he was moved to the bullpen, where he was even better, posting a 2.41 ERA in 21 relief appearances for the Astros. Those numbers made him a target for contenders at the trade deadline, and so the Astros traded him to the Blue Jays. Unfortunately, Feldman struggled after the move to Toronto, pitching to an 8.40 ERA in 15 appearances. As a result, he was not included on Toronto’s postseason roster.

Despite his struggles with the Blue Jays, Feldman’s track record was enough for the Reds to give him a chance. At the same time, he’s excited for the opportunity that awaits him in Cincinnati.

“I think that one of the more attractive things about Cincinnati was they obviously wanted me there, which you have to have that first and foremost,” Feldman said after agreeing to his deal with the Reds. “Also, in talking with them a little bit, the opportunity if I do go out there and pitch well, I think there’s a good opportunity for me there.”

With the Reds trading Straily last week, they have at least one opening in their rotation, giving Feldman the chance to win that spot during spring training. Feldman is expected to compete for that rotation spot against some against top prospects Amir Garrett and Robert Stephenson, among others.

The Reds are relying on young pitchers like Anthony DeSciafani and Brandon Finnegan to lead their rotation in 2017, but they could certainly benefit from a veteran like Feldman joining that group. Despite pitching primarily out of the bullpen last season, Feldman believes he’s ready for a return to a big league rotation.

“I think my last few years starting were all pretty similar to one another,” Feldman said. “I think as long as I’m healthy, which I’ve proved I was healthy last year. So just a matter of going out there and performing now, so hopefully I can go out there and provide the team with good, quality innings when they need me. And hopefully they need me to start, is what I’m hoping. I know I have to go out there and earn that.”

The addition of Feldman doesn’t figure to make a huge difference to Cincinnati’s season in 2017, but it never hurts to have a veteran presence on such a young team. The hope for the Reds is that the presence of Feldman can have a positive influence on their younger pitchers, while also forcing them to earn their spot in the big leagues instead of it being handed to them out of necessity. In that sense, the signing of Feldman should be a positive one for the Reds.