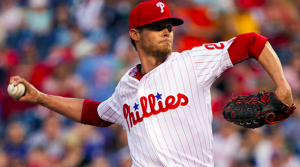 An MRI performed Wednesday revealed that Philadelphia Phillies starter Clay Buchholz has a partial tear of the flexor pronator mass in his throwing arm. The news is unfortunate but not unexpected after Buchholz lasted just 2.1 innings in Tuesday’s start against the Mets before he was removed due to pain in his arm. Buchholz will see Dr. James Andrews on Monday, at which point a treatment plan will be devised. However, at the moment it appears doubtful that Buchholz will return to the mound anytime soon, as missing the rest of the 2017 season remains a possibility for the 32-year old.

The Phillies acquired Buchholz in a trade with the Red Sox over the winter. Philadelphia assumed his entire $13.5 million salary with the hope that he could team up with Jeremy Hellickson to give the Phillies a couple of seasoned veterans in an otherwise young rotation.

However, that plan has not come to fruition. Buchholz allowed four runs on eight hits over five innings in his first start of the season against the Reds. In his second outing of 2017 Tuesday against the Mets, he gave up a three-run home run to Yoenis Cespedes in the first inning and was ultimately charged with six runs in 2.1 innings before Phillies manager Pete Mackanin and the team’s training staff removed him from the game.

“That’s the worst thing ever, having to call your manager or trainer out in the middle of an inning,” Buchholz said after Tuesday’s game. “Tried to get through it. I wasn’t doing the team any favors throwing what I was throwing at that point in time, so I made the move.”

Buchholz was sent for an MRI on Wednesday and was diagnosed with a partial tear of the right flexor pronator mass in his forearm. Surgery isn’t necessarily a guarantee if Buchholz only has a partial tear. His visit with Dr. Andrew on Monday will likely determine whether Buchholz will be able to rehab the injury without going under the knife. However, even if Buchholz is prescribed rest and rehab, he’ll likely be on the shelf for an extended period of time.

The silver lining for the Phillies is that they have a slew of young pitchers in triple-A who should be capable of filling the vacancy in their rotation. Of course, part of what made Buchholz attractive to the Phillies over the winter was the ability to give their young pitchers more seasoning. The Phillies also could have entertained trade offers for Buchholz this summer, which was another reason the trade with the Red Sox made sense for them. But with the injury, Buchholz isn’t likely to garner much interest, even if he avoids surgery.

Zach Efflin may be the most likely candidate. He started 11 games for the Phillies last year, going 3-5 with a 5.54 ERA. Efflin started in triple-A Tuesday night, and so he would be scheduled to pitch again on Sunday, which would have been Buchholz’s next start. However, Efflin underwent surgery on both knees last August and the Phillies may want him to get a few more starts in the minors before bringing him back to the majors.

Jake Thompson, who started 10 games for the Phillies in 2016, posting a 5.70 ERA, is another option. Ben Lively, Nick Pivetta, and Mark Appel could also get consideration, giving the Phillies plenty of options.

“We’ve got five starters in Triple-A that any one of them can come fill in,” Mackanin said before Wednesday’s series finale with the Mets.

As for Buchholz, his meeting with Dr. Andrews on Monday could dictate where his career goes from here. The 32-year old badly needs to pitch this year to showcase himself before he becomes a free agent this winter. At the same time, if Buchholz needs surgery, he may not pitch again this season, potentially putting his career at a crossroads heading into his appointment with the (in)famous Dr. Andrews on Monday.