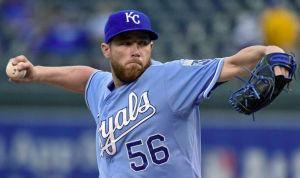 Outside of the trio of Chapman, Jansen, and Melancon, Greg Holland was one of the most intriguing relief pitchers on the free agent market this winter. Despite missing the entire 2016 season while recovering from Tommy John surgery, more than a dozen teams expressed interest in signing him. On Wednesday, Holland chose to sign with the Colorado Rockies, according to reports.

The Rockies have yet to formally announce the deal, which is pending a physical. Reports indicate that Holland will make a base salary of $7 million with $3 million in incentives based on appearances and innings pitched and an additional $4 million in incentives possible if he becomes the team’s closer. According to reports, there is also a vesting option for the 2018 season.

Prior to undergoing Tommy John surgery, Holland had become one of the best relievers in baseball, becoming an important part of the dominant bullpen the Kansas City Royals have built in recent years. Between 2013 and 2014, Holland saved 93 games in 98 opportunities, being named to the all-star team in both years.

Unfortunately, Holland struggled the second half of the 2015 season before it was determined that he had a tear in his UCL and would require surgery. It’s been suggested that he actually tore the ligament in August 2014, meaning he somehow pitched almost the entire 2015 season with the injury.

On the surface, Holland’s decision to sign with the Rockies appears odd, as pitchers have traditionally been hesitant to sign with Colorado and spend half the year pitching at Coors Field. The fact that Holland had several other suitors makes the decision all the more surprising. However, the opportunity to become the team’s closer may have pointed him in the direction of the Rockies.

The Rockies do welcome back incumbent closer Adam Ottavino, who took over the job late last season and performed well. Of course, Ottavino still has just 11 career saves, making Holland the more experienced option to handle the 9th inning. Holland will obviously have to prove in spring training that he’s healthy and capable of being the same pitcher he was before the injury. But with Holland being close to 16 months removed from the surgery, it’s reasonable that he’ll be fully recovered by the start of spring training.

Even if Holland doesn’t end up being Colorado’s closer, he does add depth to a bullpen that already includes several established pitchers. Jake McGee, Chad Qualls, and Jason Motte are all capable of being reliable bullpen options this season, as is lefty Mike Dunn, who the Rockies signed as a free agent earlier this offseason.

Of course, the Rockies signing Holland doesn’t come with a guarantee, as he hasn’t pitched in more than a year. However, if healthy, Holland offers great upside and the potential to be a dominant late-game reliever. The Rockies should have no problem scoring runs this year, and with additions like Holland and Dunn, they have a chance to put together a strong bullpen in 2017, which could be a big step towards competing in the NL West.