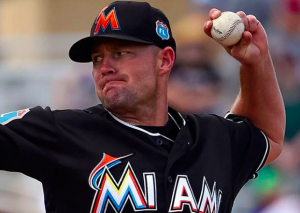 The winter of relief pitchers signing big contracts continues. The latest off the board is lefty Mike Dunn, who has agreed to a three-year deal with the Colorado Rockies with a base salary of $19 million. Dunn continues a trend this offseason of relief pitchers, even ones who aren’t closers, receiving sizable contracts. The signing of Dunn is the second significant contract the Rockies have given out this winter. Colorado previously signed shortstop turned outfielder turned first baseman Ian Desmond to a five-year deal worth $70 million to give a boost to an already potent offense.

Dunn will receive $19 million over the next three years, an astounding base salary for a setup man with little experience as a closer. His contract also offers up to another $1 million in incentives for games finished in the event he becomes Colorado’s closer. Dunn also has a $7 million vesting option or a $6 million club option for the 2020 season, meaning he could make up to $27 million over the next four years.

Dunn moves to Colorado after spending the last six seasons with the Marlins, becoming one of the most consistent middle relievers in baseball during that time. Dunn has a career ERA of 3.54 and has averaged better than a strikeout per inning throughout his eight seasons in the big leagues.

In 2016, Dunn went 6-1 with a 3.40 ERA. However, he missed nearly two months at the start of the season due to a forearm strain brought on by trying to incorporate a changeup into his repertoire. That injury limited Dunn to 42.1 innings in 51 appearances. Last season was the first time Dunn averaged less than a strikeout per inning in his career. Opposing hitters also hit .270 off Dunn in 2016, the second highest mark of his career.

Nevertheless, Dunn will immediately become an important part of a Rockies bullpen that had the highest ERA in the National League bullpens in 2016. Adam Ottavino is currently the favorite to be the team’s closer in 2017, although Dunn and fellow lefty Jake McGee could also be in the mix for that job. Jason Motte, Chad Qualls, and Carlos Estevez are also among the relievers who the Rockies may look to use late in games. During spring training, new manager Bud Black will have to sort out the back end of Colorado’s bullpen, although Dunn will undoubtedly be a key figure.

The Rockies may not be finished adding to the bullpen this winter. Signing a high-priced position player seems unlikely after the addition of Desmond, but signing another setup man, most likely a righty, to further help the bullpen remains a strong possibility. Colorado has been linked with both Brad Ziegler and Joe Blanton this offseason, and either would be a good fit for the Rockies, especially since both are familiar with the NL West.

In the meantime, the Rockies are hopeful that Dunn will become an asset in their bullpen. Scoring runs doesn’t figure to be an issue for Colorado next season, and the Rockies actually have a nice collection of young starting pitchers they feel will give them a chance to stay competitive. The last piece of the puzzle appears to be the bullpen, which is why the Rockies were willing to pay such a high price to bring Dunn on board, and why they may not be finished adding to their bullpen this offseason.