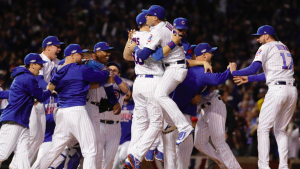 After a 71-year drought, it has finally happened. The Chicago Cubs have clinched their first World Series birth since 1945 after beating the Los Angeles Dodgers 5-0 Saturday night in Game 6 of the NLCS. It was a moment that some fans never thought they would see, even as the Cubs dominated throughout the regular season. But the moment has finally arrived, and the Cubs are now just four wins away from breaking one of the most notorious curses in sports.

Less than a week after Clayton Kershaw dominated the Cubs at Wrigley Field in Game 2, allowing just two hits over seven innings, the Cubs sought their revenge, beating up on Kershaw early and often. A Dexter Fowler double to lead off the game set the tone for the night, as if to say the Cubs would not be stopped by Kershaw this time around. Fowler’s double sparked a two-run 1st inning, while a home run by Willson Contreras in the 4th and another home run by Anthony Rizzo in the 5th capped off an impressive offensive effort by the Cubs, who chased Kershaw from the game after five innings.

Meanwhile, Kyle Hendricks was nothing short of brilliant. Despite uneven results in his previous postseason starts each of the last two seasons, Hendricks saved his best for the biggest stage, tossing 7.1 shutout innings, striking out six and allowing just two hits. The Dodgers, no doubt discouraged by Kershaw giving up runs early in the game, could not generate anything offensively against Hendricks, who turned things over to closer Aroldis Chapman for the final five outs, securing a spot in the World Series for the Cubs.

Afterwards, the city of Chicago was equal parts relieved and exuberant. “There’s a lot of pent up angst and emotion in this city, and all over the nation, Cubs fans who have been loyal through the hard times,” said Ben Zobrist, who signed with the Cubs last offseason after winning last year’s World Series with the Kansas City Royals. “We know that, but the bottom line is you have to execute at the right time and stay here in 2016. These guys have done it all year long with all the expectations on their backs. We only have four more, so let’s go do it now. We’re in the exact spot we wanted to be in. We’ve got a chance to do something that hasn’t been done in 108 years. Let’s go do it.”

Manager Joe Maddon praised his team’s ability to not to let the moment overwhelm them or allow decades of the franchise falling short to bring them down. “The thing I preach from [the first] day in Spring Training is I want us to play the same game regardless of the date on the calendar,” Maddon said. “You should not change what you’re doing regardless of the time of the year. You want to come out in October and play the same game you’ve been playing all summer.”

Cubs President of Baseball Operations, Theo Epstein, the architect of Chicago’s return to the World Series, had high praise for Maddon in leading the Cubs to the pennant. “Unbelievable job by Joe ever since he got here,” said Epstein. “Changed the culture at the Major League level. We loved everything that was bubbling up in the organization from the Minor Leagues, but to finish it off in the big league level, Joe is the best in the business in getting guys to relax, be themselves, focus. We embraced the target this year, his leadership has been everything for a lot of our young guys to settle in and play as well as they did tonight.”

It was truly an unbelievable night for the Cubs, but the season does continue for them. After a couple of days to let it sink in, the Cubs will begin the World Series Tuesday night in Cleveland against the Indians. Chicago, unsurprisingly, has opened up as the betting favorites to win the World Series, putting all the pressure on them to accomplish something the franchise hasn’t done since 1908.