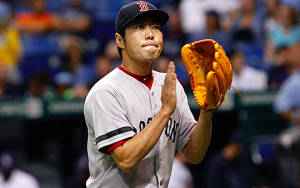 The emphasis on bullpen arms throughout baseball continues. On Wednesday, the Chicago Cubs agreed to a deal with veteran relief pitcher Koji Uehara. A source from Uehara’s home country of Japan reported the deal during the Winter Meetings. However, that report said the deal was worth $4.5 million. Wednesday’s reports indicate that Uehara has agreed to a one-year deal with the world champions for $6 million. Jon Heyman reports that there were quite a few teams bidding for Uehara, helping to explain the $6 million price tag on a pitcher who will turn 42 in April.

Uehara joins the Cubs after four years with the Boston Red Sox. He served as the team’s closer for much of his tenure in Boston, converting 79 saves in 91 opportunities over the past four seasons. However, with the acquisition of Craig Kimbrel last winter, Uehara moved into a setup role for much of 2016. Nevertheless, he was an important part of Boston’s bullpen despite missing six weeks during the second half of the season with a pectoral strain.

Somewhat predictably, the aging Uehara has seen his performance take a dip in recent years. After posting a 1.75 ERA with the Rangers in 2012 and 1.09 ERA with the Red Sox in 2013, his ERA jumped to 2.52 in 2014 and all the way to 3.45 in 2016. However, that kind of performance still makes him a valuable relief pitcher, especially in the current market, so it’s not a surprise to see him be one of the first setup men to sign this offseason.

Uehara’s success and longevity in the big leagues are a credit to both his control and his outstanding splitter. He has kept his WHIP under 1 in every season since his rookie year with the Orioles in 2009, and despite average at best velocity, his splitter has been able to keep hitters off balance. The pitch has made Uehara particularly effective against left-handed hitters, making him a full-inning reliever rather than a one-batter specialist.

The addition of Uehara continues a rebuilding project in Chicago’s bullpen. The Cubs relied on closer Aroldis Chapman throughout the second half of the season and in the postseason, but with Chapman returning to the Yankees, the Cubs had some work to do in their bullpen. With Chapman gone, the Cubs acquired Wade Davis in a trade with the Royals to be their closer in 2017.

With Davis and Uehara joining the fray, the Cubs now have three relief pitchers with closing experience, as the two new additions join Hector Rondon, who served as Chicago’s closer in 2014, 2015, and the first half of 2016 before the acquisition of Chapman. With that trio in place, the Cubs look to have a rock solid bullpen in 2017, especially with Pedro Strop and Carl Edwards Jr. also in the mix.

If there’s one thing that Chicago’s bullpen lacks at the moment, it’s a lefty, as Mike Montgomery figures to move to the rotation after a strong 2016. However, the presence of Uehara lessens that need somewhat. Even without a true lefty specialist, the additions of Davis and now Uehara put the Cubs’ bullpen in great shape heading into 2017.