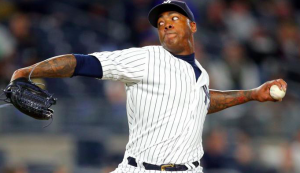 The New York Yankees have agreed to sign free agent closer Aroldis Chapman to a five-year contract worth $86 million, according to multiple reports. Chapman is coming off a World Series win with the Chicago Cubs after the Yankees traded him to Chicago midseason. Not only did the Yankees receive a huge bounty for parting with Chapman, including shortstop prospect Gleyber Torres, but they have managed to get him back in free agency.

Reports indicate that Chapman had been searching for a six-year commitment with hopes of signing for close to $100 million. In the end, he settled for five years and $86 million in order to return to the Bronx. “I love the organization, they welcomed me with open arms, and that’s why I decided to go back,” Chapman said Wednesday night after agreeing to the deal. “I was hoping I had a chance to go back, and it happened. Every player dreams of being a Yankee, and if they don’t, it’s because they never got the chance.”

Chapman’s contract sets a new record for a closer, surpassing the deal that Mark Melancon signed with the San Francisco Giants earlier this week. There’s a chance that Kenley Jansen could break Chapman’s mark, as there are still a few teams vying for his services, but it’s been expected all along that Chapman would sign for the most money among the closers available in free agency this winter.

Yankees GM Brian Cashman has indicated in the past that signing Chapman was the team’s biggest priority this offseason. “The attraction of him is that we know he can pitch in New York and he doesn’t have a Draft pick attached,” Cashman said earlier this winter. “So then it just comes down to money and term.”

The Yankees appear to have had plenty of competition for Chapman, as the Miami Marlins made a strong push for him, doing their best to land a frontline closer, especially one of Cuban heritage. “I just don’t want to go that far,” Chapman said after agreeing to the deal. “I did have the opportunity to stay here near my house (in Miami), but no, I leaned more toward New York. I like the Bronx more.” The Washington Nationals also reportedly made a late push to get Chapman after previously coming up short for Melancon.

Part of the contract stipulates that Chapman can’t be traded for the first three years, so he’s staying in the Bronx through at least 2019, no questions asked. For the final two years, there is a limited no-trade clause. His contract also states that Chapman can’t be traded to a California team, ruling out the Dodgers, Giants, Padres, A’s, and Angels.

With Chapman back in the Bronx, the Yankees will reinsert him back into the closer’s spot, with Dellin Betances becoming the team’s top setup man. Betances acted as the closer after the Yankees traded both Chapman and Andrew Miler last summer. The Yankees also have Tyler Clipart, Richard Bleier, and Tommy Layne has relievers who could pitch in the late innings, as well as pitchers like Adam Warren or Luis Cessa if they are not included in the starting rotation.

Most importantly, the Yankees once again have one of the most dominant closers in baseball, a pitcher who wants to be in New York and believes he can be part of a championship team with the Yankees. “They are full of talented young players who want to prove themselves,” said Chapman. “Last year, in a short time, they proved they can be a great team.”