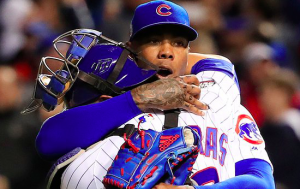 Not so fast was the message the Chicago Cubs sent the Cleveland Indians in Game 5 of the 2016 World Series. After dropping Games 3 and 4 at the friendly confines of Wrigley Field, the Cubs squeaked out a win in Game 5 Sunday night to force the series back to Cleveland for Game 6 on Tuesday. The Cubs finally gave their fans the kind of World Series night at Wrigley they’ve waited 71 years to experience, and by doing so, Chicago may have swung some of the momentum in the series back in its direction.

The Cubs did not have the kind of offensive explosion they would have liked, but led by a Kris Bryant home run, they were able to scratch our three runs in the 4th inning to take a lead they would not relinquish.

“I feel like we play our best with our backs up against the wall,” Bryant said after Game 5. “We went out there today, took care of business. Hopefully we can get out there and win Game 6, because you never know what can happen in a Game 7.”

Of course, the Cubs have rarely played with their backs against the wall. This was Chicago’s first game facing elimination since Game 4 of last year’s NLCS, which they lost, and the Cubs rarely faced the prospect of a must-win game during the regular season, so in fairness to Bryant, this was uncharted territory for the Cubs.

However, the Cubs did answer the call, preventing the Indians from being able to celebrate a world championship at Wrigley Field. Aside from Bryant leading the way in a three-run 4th inning, one of Chicago’s brightest stars in Game 5 was closer Aroldis Chapman, who was asked to get the final eight outs of the game in order to secure the win for the Cubs.

Chapman has said in the past that being asked to get more than three outs for a save is “not his favorite thing.” Nevertheless, Joe Maddon brought Chapman into the game with one out in the 7th inning and the tying run on base, and Chapman rose to the occasion. The Cuban lefty who was acquired during the season from the New York Yankees delivered one of the finest relief performances in recent memory, and that includes what Cleveland’s Andrew Miller has done on multiple occasions during these playoffs.

Fortunately for the Cubs, Maddon has the sense to tell Chapman before the game that coming in during the 7th inning was a distinct possibility, and so Chapman was ready when called upon. “Obviously, I told him, ‘I’m ready. I’m ready to go,'” Chapman said afterwards through an interpreter. “And whatever he needs me to do or how long he needs me to pitch for, I’m ready for it.”

Even after Chapman’s pitch count eclipsed 40, a frighteningly high number for a closer, his fastball was still hitting triple digits on the radar gun and was close to untouchable. “I didn’t think I was capable of hitting any of those pitches he threw me,” admitted Indians shortstop Francisco Lindor after the game, giving a testament to how unbelievable Chapman’s performance in Game 5 was.

For the Indians, Chapman’s eight outs was a cruel taste of their own medicine, as Cleveland has compiled a 10-3 record in the postseason, largely on the back of its dominating bullpen. Of course, for the Cubs, it was about winning Game 5 any way possible, and that’s exactly what they did. The Cubs now need to win two more games by any means possible, while the Indians will get another crack at clinching the World Series Tuesday night in Cleveland.