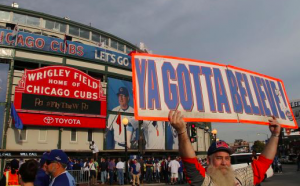 We are finally here: Game 1 of the 2016 World Series between the Chicago Cubs and Cleveland Indians. The series involves two proud franchises that have not been playing at this stage in the season in quite some time. The Indians played in two World Series in the 1990s (1995 and 1997), but they have not won the series since 1948. Of course, the Cubs have endured a much longer drought, which may or may not be aided by a curse. The Cubs last reached a World Series in 1945 and haven’t won since 1908. Both organizations should be equal parts nervous and excited for Game 1 Tuesday night.

This is always an intriguing dichotomy in the postseason to see if rest or momentum is more important. On the one hand, the Indians have had almost a week off to rest and recuperate from any injuries, not to mention get their pitching staff in order, which is particularly important with the injury to Trevor Bauer and the potential return of Danny Salazar. However, Cleveland is also 7-1 in the postseason, and the extra time off could potentially ruin some of the momentum they’ve built over the first two rounds.

On the other side, the Cubs have had just two days off since the NLCS, which is enough time to get their pitching staff in order but not necessarily long enough to kill the buzz they got from winning their first pennant since 1945. More importantly, the Cubs finally emerged offensively in the last two games of the NLCS, and they’ll be hoping that they can pick up where they left off after just two days out of action.

Both teams are sending their best pitcher to the mound in Game 1, as Corey Kluber of the Indians will be opposed by Jon Lester of the Cubs. During the postseason, Kluber has stifled the Boston Red Sox and twice contained the Toronto Blue Jays, two of the best offensive teams in baseball, and so he will not be intimidated by Chicago’s lineup. Kluber faced the Cubs in August 2015 and allowed one run on four hits over 7.2 innings, striking out 11 against a lineup that included Anthony Rizzo, Kris Bryant, Dexter Fowler, and Kyle Schwarber. In a small sample size against Kluber, Cubs hitters are 4 for 41, which should bode well for Kluber Tuesday night.

Of course, Lester has been every bit as good as Kluber during the postseason, albeit against more modest lineups. Nevertheless, Lester has been outstanding during the playoffs, and is a good bet to keep it going in Game 1. However, several of Cleveland’s hitters have had success against Lester in the past, including Mike Napoli, who is 6 for 10 with two home runs. Rajai Davis is another player to watch, as he’s hitting .304 in 46 at bats against Lester with seven extra-base hits. The Indians also have the versatility to load up on right-handed hitters to make things difficult for Lester.

The biggest X-factor in Game 1 could be how Lester handles base runners. The Dodgers bluffed running against him in the NLCS, but the Indians won’t as shy, as Cleveland was 4th in the majors in stolen bases this year. Cleveland hasn’t done much running during the playoffs, but Davis, Jose Ramirez, and Francisco Lindor are all threats to run, so if Lester can’t keep those players off the base paths, he could create extra trouble for himself.

The Cubs are series favorites, as well as betting favorites in Game 1. However, they will be brought back to earth Tuesday night after an exciting weekend. Kluber and Lester is a great pitching matchup, but Cleveland’s speed can be a game changer against Lester. The Indians will also have a fresh bullpen, and if Kluber can get through six innings with a lead, Andrew Miller and Cody Allen can take it from there. Cleveland wins 4-2.