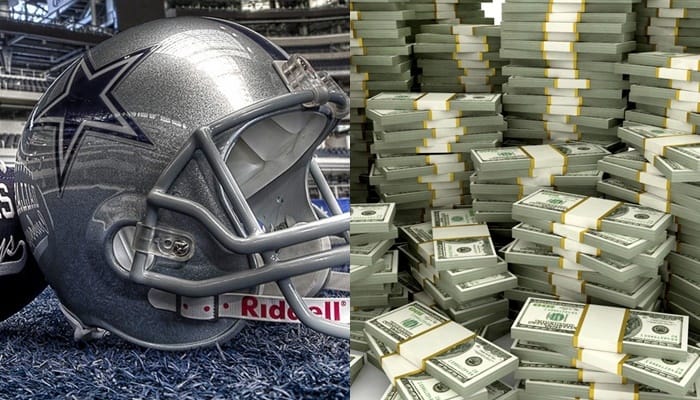 At one time, the Dallas Cowboy were America’s Team because of their winning ways. However, for the last couple of decades, they have been the definition of mediocrity—which is something America has never really been about.

So how are they still America’s Team? Easy—because the Dallas Cowboys excel at what America is all about better than any other sports franchise in the world.

Making money even though they are not very good.

Forbes recently came out with this year’s edition of the 50 Most Valuable Sports Franchises in the World, and for the first time since they began making the list in 2011, a soccer team did not hold the No. 1 spot.

Real Madrid, who held the top spot for the last three years, was as good as ever, and the team generated more revenue than any other sports franchise in the world at $694 million (Dallas made $620 million in revenue). However, the team’s value only rose 12 percent to $3.65 billion which wasn’t enough to keep the top spot.

The Dallas Cowboys, on the other hand, were terrible last season without Tony Romo and went 4-12. Despite their terrible record, the team’s value rose by 25 percent to $4 billion.

Jerry Jones has always been a master at finding ways to make money off the team. In 2014, the Cowboys were at the head of the pack as the world’s most profitable franchise with $270 million in operating profit, $75 million more than any other team.  The Cowboy’s profit margin is in large part due to Jones’ control over the revenue streams for the Cowboys home field, AT&T Stadium.

The complete top ten most valuable sports franchises in the world are as follows:

Barcelona and Real Madrid will make a serious push for the top spot next year with the help of their new kit (uniforms) contracts. Real Madrid’s will be worth $1.6 billion over the next decade (about four times the previous contract). Barcelona signed a deal with Nike valued at $175 million a year.

NFL teams dominated the top 50 with 27 teams followed by the NBA (eight) and European soccer teams (eight) and Major League Baseball with seven. The average value of a team in the top 50 is $2.2 billion. For someone to crack the list next year, they will have to do better than the Jacksonville Jaguars, who came in at No. 50 at $1.48 billion.

The biggest movers were the Los Angeles Rams whose value increased from $1.46 billion (No. 36) to $2.02 billion (No. 23). Ferrari’s Formula One team holds the distinction of being the biggest dropper going from No. 32 to out of the top 50. The team’s value did not change from the previous year at $1.35 billion.