Delino DeShields Jr. Could Be Surprise Starter for Texas Rangers 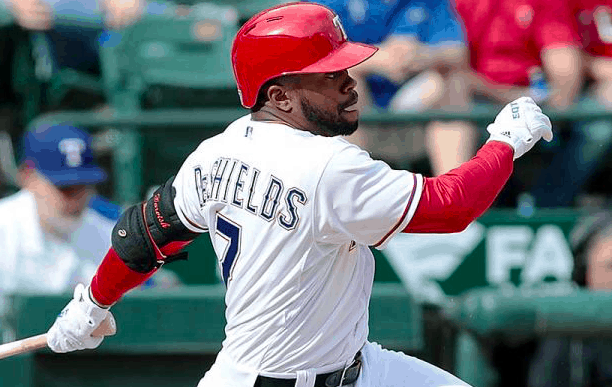 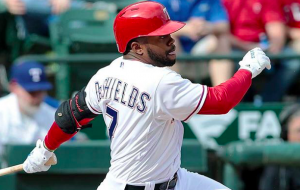 When spring training began, Delino DeShields Jr. appeared to be an afterthought in the Texas Rangers outfield. He looked destined to get lost in the shuffle after immense struggles throughout the 2016 season. However, with opening day less than a week away, not only has DeShields secured a spot on the roster, but he could end up being the team’s primary left fielder and leadoff hitter in 2017.

With Carlos Gomez returning to the Rangers, joining Nomar Mazara and Shin-Soo Choo, the Rangers appeared to have a rather crowded outfield. However, with Texas hoping to get Choo time at DH, there was at least some opportunity for DeShields to earn at least a part-time role with the Rangers this season. But when the team signed Mike Napoli, it caused a chain reaction that sent Jurickson Profar and Ryan Rua to left field, where DeSheilds figured to get most of his playing time.

With Gomez cemented into center field and Profar and Rua expected to get most of the time in left field, it was easy to overlook DeShields early in camp. But all he’s done is hit .302 with a .769 OPS and 12 stolen bases, drawing the attention of Banister and company and potentially catapulting him into a starting role.

“Delino has had a great camp,” explains Banister. “Great in the sense of what we asked of him, trying to change back to a fast body and regain his quickness. He hit that checkmark.”

After last season, the Rangers asked DeShields to focus on his speed and not his power, hoping that he could return to being the player who was a frequent contributor as a rookie in 2015. Sensing his opportunity, that’s exactly what DeShields did this winter.

“I felt I didn’t have that first step or was as explosive as I had been in the past,” says DeSheilds. “So I took it upon myself to shed the weight to regain that explosiveness.”

With 16 hits and 14 walks this spring, not only is DeShields rocking a .448 OPS, but he’s also 12 for 12 on stolen bases attempts, swiping a bag almost every other time he gets on base. Such a performance could not only put DeSheilds in the lineup on opening day, but it could also put him in the leadoff spot on a regular basis this year.

“It’s been pretty special to watch,” says Banister. “He’s continued to work with a purpose. He’s been able to translate that into the games. I just think this is a fresh player who really dedicated himself in the off-season and really got himself in a good place.”

Meanwhile, Profar, who many penciled in as the team’s left field after the Napoli signing, has struggled this spring and missed significant time this spring while playing in the World Baseball Classic for Team Netherlands. Profar excelled during the WBC, but his struggles during his time in camp with the Rangers could end up helping DeShields become a surprise starter in left field.

Also working in DeShields’ favor is the fact that he has not seen a drop off in his performance late in the spring. He also hasn’t let his strong play this spring make him complacent.

“I am happy with a lot of stuff, but there are still some things I can improve upon,” DeShields says. “Every opportunity I get, I want to be as consistent as I can. I know the work I did in the offseason is paying off. I just keep grinding.”

Banister hasn’t made a decision on who will start in left field on opening day. But it’s obvious that he’s going to find a way to get DeShields regular playing time during the season. It’s also possible that DeShields can surprise everyone by being the team’s opening day left fielder, something no one would have guessed at the start of spring training.