Posted on December 7, 2016 by Bryan Zarpentine 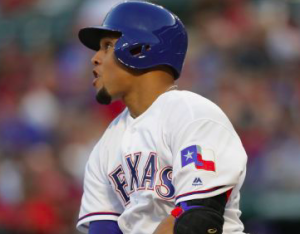 The Texas Rangers are welcoming center fielder Carlos Gomez back to Arlington. Multiple sources reported late Tuesday that Gomez has agreed to re-sign with the Rangers on a one-year deal worth $11.5 million. The team has yet to announce the deal, as it is still pending a physical. Gomez was signed by the Rangers in late August after parting ways with the Houston Astros. He showed a surprising re-emergence in the month and a half he spent with the club, positioning him to sign a rather lucrative, albeit short-term contract as a free agent.

When Gomez originally signed with the Rangers in August, they weren’t sure what they’d get out of him after such a poor year in Houston following a deadline trade from the Brewers to the Astros in 2015. However, Gomez became one of the team’s most productive offensive players over the final month of the season. In 33 games with the Rangers, Gomez hit .284 with eight home runs, six doubles, and 24 RBIs, posting .905 OPS, a most pleasant surprise for the Rangers.

Those close to Gomez have said that his struggles in Houston may be due to placing too much pressure on himself after being dealt in such a blockbuster trade. To be fair, his numbers had started to decline some before he left Milwaukee, but Gomez really went off the rails after moving to Houston. However, after the Astros released him and he signed with the Rangers, it appeared that Gomez was able to relax, and his performance improved as a result

Of course, when Gomez first came to the Rangers, he was in the middle of a somewhat crowded outfield and a rather dynamic lineup. Now that he’s back, Gomez will be asked to play a much bigger role on the team, likely as the every day center fielder. The Rangers have already seen Carlos Beltran and Mitch Moreland sign with other teams, and with Gomez on board, it’s likely that Ian Desmond will end up signing elsewhere. Thus, Gomez will have to help make up for the absence of those three players, who were all meaningful contributors last season.

Gomez now appears to be the every day center fielder for the Rangers, with Nomar Mazara and Shin-Soo Choo pencilled into the corner spots, although the Rangers have mentioned in the past their desire to get Choo more time at DH to help keep him healthy after four separate DL stints for four distinct injuries in 2016. Ryan Rua will be an option in the corner outfield spots, while Delino Deshields figures to be another backup outfielder and the only realistic backup to Gomez in center field outside of Choo. This puts a certain amount of pressure on Gomez to be one of the team’s better performers in 2017.

Nevertheless, this is a positive signing for the Rangers. They did not commit to a long-term deal, which likely would have been the case for top-tier outfielders like Desmond or Dexter Fowler. The Rangers also signed a player who has the potential to be an impactful player and had a great six weeks with the club at the close of 2016. If Gomez struggles the way he did in Houston, it could hurt Texas considerably, as they don’t appear to have a backup plan on their roster at the moment. But the Rangers should feel good about taking a chance on Gomez for another year.