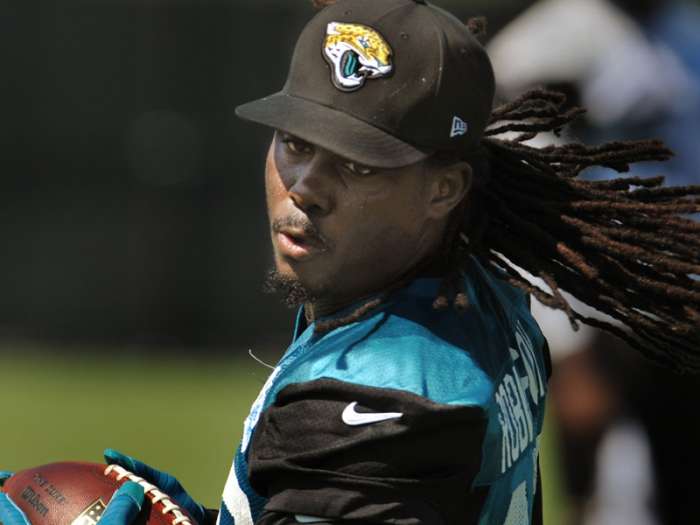 When you are tired, you are tired, right? We’ve all been there. We’ve all been so tired we couldn’t keep our eyes open a second longer. When someone tried to wake us up, we resisted. We rolled back over; we pushed them off and tried our hardest to do whatever we could to get a little more shut-eye. It didn’t matter where we were or what time of day it was.

We were tired and darn it–we wanted to sleep.

But have you ever been so tired that you fell asleep at the wheel, drove over a sidewalk and into a retention pond and then continued to sleep as the police tried to rescue you? That appears to be exactly what Jacksonville Jaguars running back Denard Robinson did over the holiday weekend.

Robinson crashed his car into a retention pond Sunday morning and was found asleep at the wheel by police. According to the officer that responded to the call, the driver’s side of the car was already submerged when he arrived on the scene, so he had to knock on the passenger side window to wake Robinson and his passenger, a woman, up.

Robinson opened his eyes but then went back to sleep. The officer continued to knock on the window, and eventually his passenger woke up enough to say “what’s up?” He explained to her that the car was sinking in a retention pond, and they needed to get out of the car.

She responded by trying to roll the window up, but the officer was able to unlock the door before she could do so.

At this point, you would think she would be conscious enough to realize what was going on, but she wasn’t. She refused to get out of the car and had to be pulled out by the officer.

Surely at this point, Robinson was up and talking sense into his friend, right? Wrong! He slept through the whole exchange his friend had with the officer.

At this point, the officer was able to get into the car, turn it off, and wake Robinson up. According to reports, Robinson thought he was still on the road and refused to get out of the car. He did, however, try to open his own door few times even though the officer kept telling him the car was sinking into the pond.

Robinson eventually exited through the passenger side. Neither he or his passenger were injured, and both refused help from paramedics.

To be that out of it, undoubtedly Robinson and his passenger had to be trashed, right? Well—according to a second officer at the scene neither were intoxicated. No citations were issued.

Robinson has released a short statement:

“I just wanted to let everyone know that I was involved in a single-car accident on Saturday night, and thankfully, everyone was safe and remained unharmed,” Robinson said Tuesday on Twitter.

“I thank God every single day for the opportunities he has presented me with and I’m grateful every morning to wake up healthy.

“I should not have been driving that late or when I was that tired, but again, I’m just glad that everyone was safe. God Bless.”

So—for now, we are expected to believe that the whole mess happened because he fell asleep at the wheel.

Really. That’s it. Nothing else.

Robinson is going into the final year of his rookie contract, and will be sitting behind T.J. Yeldon and Chris Ivory on the depth chart. He saw action in 13 games last season, but only tallied 266 yards on 67 carries and another 164 yards on 21 receptions.