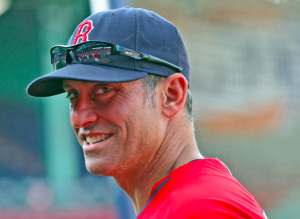 The Arizona Diamondbacks announced Friday that they have hired Torey Lovullo as their new manager. Lovullo has spent the last four seasons as the Boston Red Sox bench coach. The Diamondbacks will hold a press conference on Monday to formally introduce Lovullo as their new manager. He has reportedly signed a three-year deal with the Diamondbacks. Lovullo replaces Chip Hale, who was fired following the 2016 season after just two seasons managing in Arizona.

Lovullo’s hiring in Arizona is not at all surprising. He was always the favorite to land the job ever since the Diamondbacks hired Mike Hazen as their new GM. Hazen was previously the GM of the Red Sox, and so he had a previous relationship with Lovullo that likely played a role in the hiring. Phil Nevin, who manages Arizona’s triple-A affiliate in Reno, was reportedly the other finalist for the position before the Diamondbacks decided to hire Lovullo. Royals bench coach Don Wakamatsu, Cardinals bench coach David Bell, and former big leaguer Alex Cora also interviewed with the Diamondbacks, according to reports.

“I appreciate the opportunity to join the D-backs family,” Lovullo said in a statement. “I’m excited to get to work with the staff and players to help lead this organization back to title contention. I also thank the Boston Red Sox for the invaluable opportunities provided to me over the last four years.”

Hazen also released a statement, expressing his satisfaction in hiring Lovullo. “I’m excited to have Torey as our manager,” the statement read. “We share the same goals and mindset about how to be a championship-caliber organization.”

Lovullo spent parts of eight seasons in the big leagues as a player between 1988 and 1999, playing for seven different organizations during that time. His major league career ended in 1999 with the Philadelphia Phillies. He was a career .224 hitter with 15 home runs. He played the 2000 season in Japan before retiring as a player and beginning a career as a minor league coach.

In 2002, Lovullo became a minor league manager in the Cleveland Indians organization. From 2002 to 2010, Lovullo managed six different minor league teams, working his way up from A-ball to triple-A. During that time, he was twice named his league’s Manager of the Year.

After managing Boston’s triple-A affiliate in 2010, Lovullo joined the Toronto Blue Jays coaching staff under manager John Farrell. After two years in Toronto, Lovullo followed Farrell to Boston in 2013. When Farrell missed time in 2015, Lovullo’s served as Boston’s interim manager. He posted a 28-20 record during that time.

Lovullo is clearly qualified to be a major league manager, and over the last couple of years it seemed like only a matter of time until he got an opportunity. He takes over a team that had great expectations heading into 2016, only to fall flat on their face. Hazen has some important decisions ahead of him that will dictate expectations for Lovullo and the club in 2017. However, Lovullo joins a division that already has two perennial contenders in the Dodgers and Giants, and so managing the Diamondbacks is inherently an uphill climb and will be a great challenge for Lovullo.