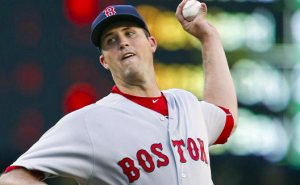 Boston Red Sox lefty Drew Pomeranz is in a unique position; he was an all-star last season, but is somehow not a lock to be in his team’s starting rotation this year. After the acquisition of Chris Sale, three of the spots in Boston’s rotation are spoken for with Sale and a pair of Cy Young winners  in David Price and Rick Porcello. This leaves Pomeranz, Steven Wright, and Eduardo Rodriguez to battle for the final two spots.

The acquisition of Pomeranz last July was a big deal for the Red Sox. They gave up prized prospect Anderson Espinoza to get him, and were hoping the southpaw could help put them over the top. However, Pomeranz was inconsistent after arriving in Boston, and after four rough September starts, he was relegated to the bullpen for the playoffs.

While Pomeranz never went to the DL, his performance the second half of last season was plagued by elbow trouble that the San Diego Padres withheld from the Red Sox prior to the trade. MLB offered the Red Sox the chance to reverse the trade, but they chose to keep Pomeranz, knowing that when he’s healthy, the southpaw is capable of pitching like the all-star he was last season.

When he got his elbow checked out after the season, Pomeranz was told he would be able to avoid surgery. However, he revealed to reporters over the weekend that he chose to receive a stem cell injection in his elbow. The procedure, which is experimental, involved taking stem cells from his hip bone and injecting them into his elbow. Pomeranz says he’s now “ready to go” following the elbow injection.

“It just promotes healing, I guess. It just uses your own stem cells, your bone marrow and just kind of adds some help to whatever area it’s injected with blood flow,” the southpaw explained to reporters. “You can rest and it probably would have been all right. This multiplies your chances.”

Of course, while he says he feels good physically following the injection, Pomeranz admits that not all of his problems following his trade to Boston last year can be blamed on a balky elbow.

“I think I wasn’t as accurate with some of my pitches,” says Pomeranz. “I did a really good job of staying on the inside of the plate earlier in the year. I think I found the middle of the plate a little bit toward the end of the year for whatever reason — I don’t know. It being late in the season, I was just trying to figure that out. I take all of those things into account heading into the new year.”

Pomeranz will have to figure things out quickly as he competes with Wright, who was also an all-star in 2016, and Rodriguez, a young lefty who the Red Sox believe has a high upside. Of course, Pomeranz also had to compete for a spot in the rotation with the Padres last spring, so he’s been in this situation before and he appears ready for the challenge of trying to beat out Wright and Rodriguez.

“In my head, I always feel like I’m competing for something,” Pomeranz said. “The moment you start to feel comfortable, you lose a little bit of an edge. Whether I’m competing or whether I’m not, I still look at it like I am, and that keeps me prepared and helps me push a little harder to be successful.”

Perhaps working against Pomeranz is the fact that he pitched out of the bullpen with success earlier in his career. But he has no intention of going back to the bullpen at what should be the peak of his career. With his elbow problems reportedly behind him, Pomeranz appears ready to fight for a spot in what could be one of the best rotations in baseball in 2017.