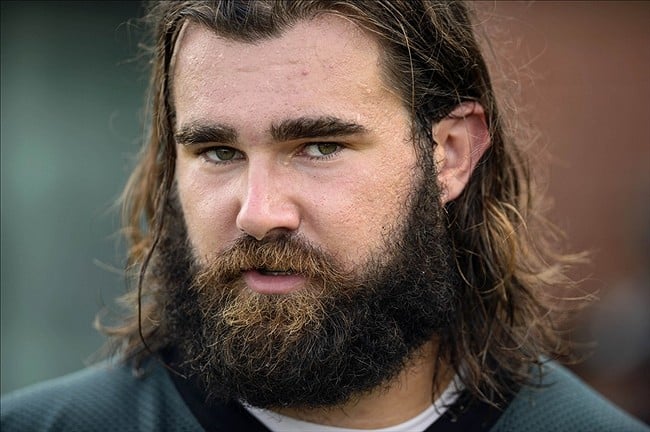 People tend to get very emotional when they discuss certain things, and with the anonymity that social media provides, they often say things that they would never consider saying face to face. It is not uncommon to see people threaten violence, tell people they should kill themselves, or even make death threats.

Presidential candidate Hillary Clinton has likely received more death threats than she would care to admit, and early Friday morning she got one from a surprising source—the Twitter account of Philadelphia Eagles center Jason Kelce.

Kelce was quick to delete the tweet and ended up scrubbing his Twitter account of all tweets, but has yet to fix the part in his bio that says he is a “professional basketball player for nba.”

He has given the usual defense whenever an inappropriate tweet is made—that he was hacked. Perhaps knowing that people would still doubt him, he said he could provide emails that prove he was.  He also said that his Instagram account was hacked a few weeks ago. The hacker deleted all of his pictures.

As it turns out, other tweets were sent by the hacker along with the threat to Hillary Clinton:

“You should be arrested you old hag @HillaryClinton.”

You can probably guess what letter is missing.

There is no reason to believe that Kelce made any of the tweets mentioned above. He has never been known to do anything as stupid as make threats to a presidential candidate. It is not unusual for a professional athlete to have his social media accounts hacked. It happens all the time.

When it comes down to it, the only harm done here will be Kelce not tweeting for a few days as he regains control over his account. The team has certainly had worse things happen this off-season.

The Eagles running back, LeSean McCoy, has been the subject of an investigation stemming from an incident at a local club. He was supposedly involved in a fight at a club back in February in which off-duty police officers were injured.

In April, the district attorney announced no charges would be filed against McCoy. The state’s attorney general recently announced that the investigation had been dismissed, but the NFL is still reviewing the matter so he may not be in the clear yet.

McCoy will likely not face any discipline from the league since he was not formally charged with a crime.

Philadelphia Eagles wide receiver Nelson Agholar is still under investigation after being accused of raping a dancer in a local gentleman’s club in early June. It remains to be seen if he is going to face charges yet, but the police have sent the file to the district attorney for review.

The Eagles will have a lot to prove this season after the Chip Kelly Era ended up being a complete disaster.