Eddie Lacy Has Heard Enough Of About His Weight Issues 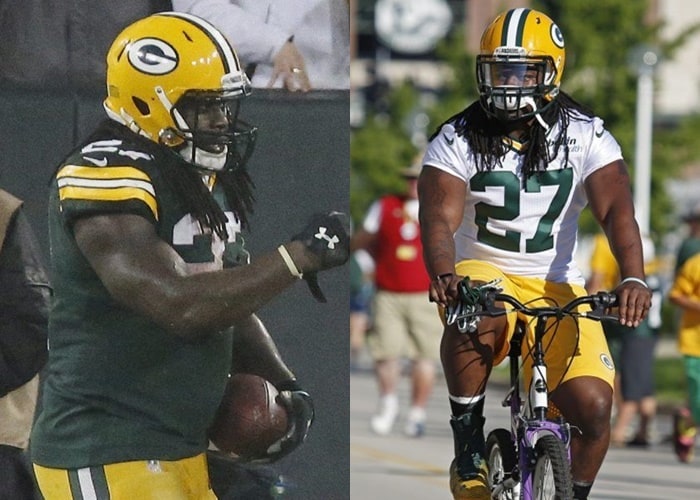 Fat people know they are fat. If the media were to latch onto to a 300+ pound offensive lineman whose team wants him to lose a little weight no one would care. He’s supposed to be a big guy, and when he loses the weight the team wants him to, he’ll still be big.

Running backs, however, are a different story. They are supposed to be lean, mean, yard-eating machines. So when Green Bay Packers head coach Mike McCarthy commented last season about his running back’s conditioning, Eddie Lacy’s weight become a popular topic of conversation:

“Eddie Lacy, he’s got a lot of work to do. His offseason last year was not good enough, and he never recovered from it,” McCarthy said during his season-ending news conference (ESPN). “He cannot play at the weight he was at this year.”

The Green Bay Packers listed him at 234-pounds last season, but according to media reports he was closer to 260 pounds by time the season ended last year. There are defensive lineman and linebackers that play at that weight or less.

So going into the offseason, the goal was clear for Lacy—drop some pounds. If he needed a reminder, all he needed to do was run a search for his name online. The media, blog-o-sphere, and fans/haters on social media were more than ready with a comment or two on his physical condition.

With the 2016 season being a contract year for him, he had to rebound from a lackluster 2015 season if he wants to get paid. He knew he had to lose weight, and he did. By time off-season workouts rolled around his weight was around 240s.

The Packers still list him at 234 pounds, but it is easy to tell he has dropped some serious pounds. He did it almost like thousands of other Americans—P90X. However, he didn’t just play the programs and do the workouts. He hooked up with P90X founder Tony Horton.

When a fat guy loses a significant amount of weight, he is more than happy to talk about his success. Lacy, however, has had enough with all the talk about his weight and is tired of hearing about it:

He seemed a little defensive when asked about it after practice Tuesday (Yahoo):

“Do I look like I lost a few pounds over the summer?” When told yes, he responded with: “Well, you can go with that.”

He also made it pretty clear how he feels about talking about his weight:

“I’m tired of talking about it,” Lacy said after Tuesday’s practice, the first of training camp. “I’m pretty sure you all are tired of asking about it. I’m tired of hearing about it everywhere I go. I’m done with that.”

Mike McCarthy got a little testy when asked about it as well, but what do they expect? It’s still the offseason for the media which means there is not much to talk about. When you are in the public eye like football players are, nothing is off limits. So the media is going to latch onto whatever they can and run with it until something better pops up—like his weight loss.