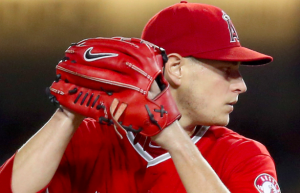 Just one start into the 2017 season, the Los Angeles Angels have placed ace Garrett Richards on the 10-day DL. Richards was removed from his start Wednesday against the Oakland Athletics after 4.2 innings because of cramps in his biceps. The righty underwent a precautionary MRI on Friday that revealed a strain of the right biceps, prompting the Angels to place him on the DL. The move to the DL is obviously not ideal, but it’s far from the worst-case scenario.

Heading into the season, Richards was one of the top pitchers in baseball to watch. His 2016 season lasted just six starts until he was diagnosed with a tear of the ulnar collateral ligament in his elbow. Instead of undergoing Tommy John surgery, Richards opted to undergo an alternative procedure to Tommy John that few major league pitchers have tried.

After Richards passed on Tommy John, there was great curiosity about how his elbow would hold up. Despite lasting just one start before heading to the DL, there is some sense of relief that the problem isn’t elbow related, as Richards insists that he feels fine aside from some soreness in his biceps.

“Oddly enough, I feel pretty much 100 percent normal right now,” Richards said Friday. “There is obviously a strain, so the smart thing to do would be to kind of let it calm down. It’s kind of what we’re doing right now, but I feel totally fine, with the exception of that. My elbow is in great shape, and they’ve already looked over my shoulder and everything. It’s the best that we could have hoped for at this point.”

It’s possible that Richards will only miss one start while on the DL, two at the most. He’ll refrain from any kind of throwing for a few days but is planning to start tossing early next week. Richards will have to throw a bullpen session and come out of it pain-free before returning to the rotation, but if that happens, there’s a chance he could return soon after he’s eligible to be activated from the DL on April 16.

“The information from our medical department is encouraging to the extent that it’s relatively minor,” explains Angels manager Mike Scioscia. “We’re hoping just keeping him away from throwing a baseball for about a week will get this behind him, and then we’ll just see how he responds to his bullpens and when he’s ready to go. But considering where Garrett was last year, this is just a little minor bump in the road.”

Considering his elbow trouble last season and potential importance to the Angels as the team’s ace, Richards understands the better-safe-than-sorry approach.

“I think it’s just a precautionary thing,” Richards said. “Missing one start now might prolong the season. It might be even beneficial for me moving forward, instead of just rushing me back.”

With Richards going on the DL, the Angels have called up Mike Morin as an extra reliever. The team isn’t yet sure who will fill in for Richards in the starting rotation. Los Angeles has an off day Monday, and so for the time being, they can move forward with everyone still pitching on regular rest.

However, the Angels will need a fifth starter by next Saturday, one day before Richards is eligible to return. Yusmeiro Petit, who’s currently in the Los Angeles bullpen, could make a spot start. The team could also call up Alex Meyer, who started five games for the Angels last year, to make one start before Richards returns.

With any luck, Richards will end up missing no more than one start before returning from the DL. Considering his injury-plagued 2016 season, an early stint on the DL was not ideal. However, as long as the injury that sent him there isn’t related to his elbow, the Angels will surely take it.