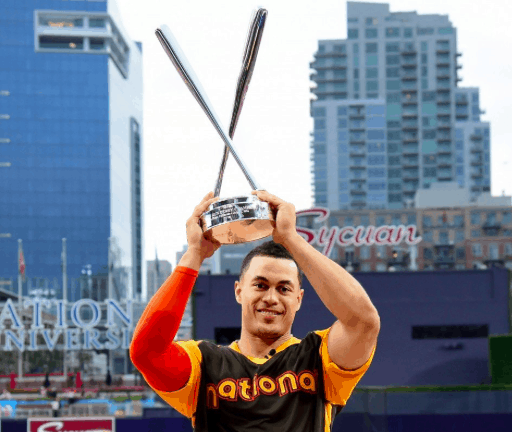 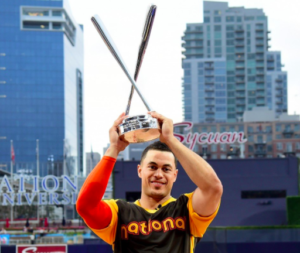 Miami Marlins outfielder Giancarlo Stanton is having a down year, at least by his standards. Despite hitting 20 home runs, he’s batting just .233, and for the first time since 2013, he was not named to the All-Star Team. However, Stanton did receive an invitation to participate in this year’s Home Run Derby, and Monday night in San Diego, he did not disappoint. Stanton won the Derby, defeating defending champion Todd Frazier in the final round and totaling an astounding 61 home runs, obliterating the previous high of 41 set by Bobby Abreu in 2005.

In addition to winning the Home Run Derby, Stanton was also responsible for the longest home run at Petco Park Monday night, hitting one that traveled 497 feet, as well the highest exit velocity at 120 mph. In true Stanton fashion, he hit home runs to all fields, showing that he has as much power hitting the ball the other way as he does pulling the ball to left field, a fact most teams around the National League are likely aware of already.

Stanton got off to a fast start, hitting 24 home runs in the opening round, crushing Robinson Cano, who managed just seven homers after watching Stanton’s display of power. The Marlins slugger showed no signs of slowing down in the semi-finals, edging Mark Trumbo 17-14. He then led off the final round by hitting 20 homers, with Frazier only able to counter with 13.

Afterwards, Stanton spoke about not wasting his opportunity after traveling to San Diego solely for the Derby. “For sure, being on the West Coast and taking the flight out here just for this, you know. I figure it’s a waste if I don’t bring this bad boy home,” Stanton said while holding the trophy.

Frazier, who succumbed to Stanton in the finals, was astonished by the man who beat him. “He was hitting moonshots,” Frazier said. “I thought I was a high school hitter compared to him hitting them that far. I said it was going to be one of the most epic home run battles, and I think it really stepped up to the name.”

Stanton said he’s thrilled to be crowned home run champ after he grew up watching the Home Run Derby. “That is where I got my childhood memories, watching the Home Run Derby as a kid,” he said.”Maybe some kids are watching me. I would like to return that.” Stanton will have a chance to defend his trophy next season in his home ball park when Miami plays host to the all-star festivities.