Greg Bird Confident in Return After Sitting Out 2016 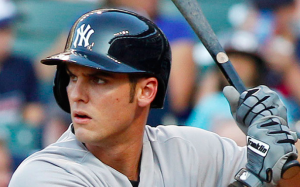 It’s never easy for a player to come back from a long-term injury, especially when that player has barely had time to establish himself in the big leagues. But that’s exactly the position that New York Yankees first baseman Greg Bird finds himself in heading into the 2017 season. Bird made a great first impression with the Yankees late in the 2015 season, hitting 11 home runs and nine doubles in just 46 games, only to miss the entire 2016 season due to a torn labrum.

Now he faces the challenge of coming back after a year away and picking up where he left off. But Bird is confident that he’s healthy and he’ll be able to do just that in 2017.

Naturally, Bird was upset that he had to sit out the entire 2016 season, especially after the instant success he had in the majors at the end of 2015, which could have set him up for an important role with the Yankees last year.

“Disappointing, I’ll be honest,” Bird said about sitting out last year. “Not what I expected. I wanted to get there and stay there and come back the next year and be a part of the team. It’s frustrating. It’s disappointing. But it was the hand I was dealt and I had to get better. It’s a good lesson for me, a tough experience, but I’m enjoying being back and being part of spring this time and being able to play.”

Fortunately for Bird, he was able to recover in time to play in the Arizona Fall League, albeit as only a DH. With spring training now underway, Bird is fully recovered and cleared to play both offense and defense, and so far he feels good physically.

“I feel good every day and I recover every day, so that’s big for me,” Bird said Monday. “I feel better in a lot of ways, and I think that will get better as I get used to playing every day.”

Not only is Bird feeling healthy and ready to get back in the lineup every day, but the Yankees are excited to have him back, knowing what he’s capable of doing now that he’s healthy.

“We saw it for a two-month period,” Yankees manager Joe Girardi said about Bird, referencing his performance from late in the 2015 season. “I know there will be some adjustments and he’s coming off of injury, but I’m not going to get so caught up in the power numbers. If he’s who we think he is, he’s gonna be plenty good.”

Of course, the Yankees have some insurance just in case Bird has an injury setback or struggles after a year on the shelf. Earlier this month, the Bronx Bombers signed Chris Carter, who is set to compete with Bird for time at first base. However, Bird is choosing to look at the addition of Carter as a positive.

“It’s exciting,” Bird said of the team signing Carter, who tied for the National League home run lead last season. “We got a good bat. Someone I can learn from. I think for me coming into camp, I have to prove that I’m healthy and get used to playing again, so I’ve got enough on my plate. It’s exciting. It’s good for us.”

With Carter in the mix as competition and some level of concern over the health of his shoulder, there’s a lot on Bird’s plate this spring. But he’s quietly confident and trying to stay focused on the things he can control.

“I want to play and maximize my potential, become the best player that I can be every day and in the future. And help this team win games. That’s my focus,” Bird says, concluding, “Now it’s go-time.”