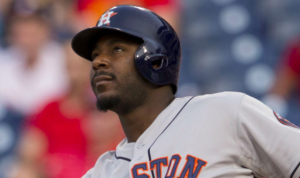 For nearly a month, the New York Yankees have been quiet, making it appear that they were done making moves this offseason. However, GM Brian Cashman has surprised many by bringing in one of the top power hitters in baseball. Multiple outlets are reporting that the Yankees have agreed to a one-year deal with first baseman Chris Carter. The deal is reportedly worth $3.5 million, with up to $500,000 in incentives based on Carter’s plate appearances this year.

Carter was tied for the National League lead in home runs last season with 41, while playing in 160 games for the Milwaukee Brewers. However, the Brewers did not tender him a contract for 2017, as they were hesitant to pay for the significant raise he would have received in arbitration. Milwaukee also had concerns about Carter hitting just .222 and striking out more than 200 times last season. He also brings little to the table in terms of speed or defense.

Like most power hitters on the free agent market this winter, Carter had a difficult time finding a job, and even considered signing with a team in Japan. Several teams, including the Rays and Marlins, checked in with Carter in recent days, but no team made him an offer that was to his liking. The Yankees, meanwhile, had not been linked with Carter or any of the other free agents still left on the market, essentially coming out of nowhere to sign the slugger.

The Yankees signing in Carter is a surprise in large part because he profiles best as a DH, and the Bronx Bombers filled their vacancy at DH earlier this offseason when they signed Matt Holliday to a one-year deal. Unless the Yankees find a way to move Holliday to the outfield, which is unlikely, Carter figures to get more of his at bats as a first baseman.

Before signing Carter, Greg Bird and Tyler Austin were in line to split the duties at first base for the Yankees, with Bird likely to get most of the time. Of course, after showing great promise in 46 games as a rookie in 2015, Bird missed all of last season following shoulder surgery. The Yankees are obviously hopeful he can pick up where he left off in 2015, but there’s no guarantee of that. The signing of Carter is essentially insurance in case Bird struggles to shake off the rust this season.

Meanwhile, the addition of Carter could mean Austin is sent back to triple-A in 2017, despite a strong showing last September, hitting .286 with a .946 OPS. It’s important to keep in mind that Austin has spent most of his minor league career as an outfielder, and so he may have a chance during spring training to compete for a spot in New York’s outfield. However, Brett Gardner and Jacoby Ellsbury still hold ownership over two of the three outfield spots, while the Yankees figure to give Aaron Judge every opportunity to win the every day job in right field.

As for Carter, there’s no guarantee he becomes a full-time player with the Yankees this season, but he could end up playing an important role for the Bronx Bombers. He provides insurance at first base in case Bird struggles coming off shoulder surgery. Carter also provides another option at DH if necessary and a power threat coming off the bench. This was certainly a surprising move by the Yankees, but one that has a chance to pay off in 2017.