"Mr. Price has been given the "Billy Walters treatment" by the betting establishments in the Las Vegas area, due to his distinct ability to pick winners and cost casinos millions."
Home
Baseball
Houston Astros Designate Carlos Gomez for Assignment 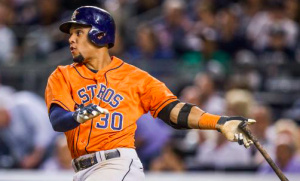 The Houston Astros announced Wednesday night they have designated outfielder Carlos Gomez for assignment. The move allows the Astros to wash their hands of Gomez, who has had a nightmare of a season after he was acquired at the trade deadline last year and became a part of Houston’s run to the postseason. On the season, Gomez has hit .210 with an OPS of .594. If he goes unclaimed on waivers and isn’t traded, which figures to be likely, Gomez will become a free agent.

“This has nothing to do with Carlos’ effort,” Astros GM Jeff Luhnow explained Wednesday. “Carlos has put in 100 percent. We all see how much he enjoys playing the game and how much he cares about what happens. It’s one of those situations where for whatever reason it didn’t work out the way here he wanted to and we wanted to, and we felt it was the best interest of the organization and the team to move on and potentially get a fresh start somewhere else.”

“It’s not a secret that I wasn’t doing my job,” Gomez said after learning the news. “I’m really disappointed in myself. The organization traded for me because they needed a center fielder, and they gave me all the opportunity and I didn’t do my job. I feel bad about this. I’m a hard worker and every day I do my best, and I know being released is really tough for me, but I say thank you to the Astros. They always believed I could help this team win games and I didn’t do it. When this happens, you have to move on.”

Luhnow says no one could have predicted such a drastic drop off in performance by Gomez from one year to the next. “We expected him to continue to produce at a high level. From that standpoint, it’s disappointing, but you can’t win them all. Some trades are going to work out and some aren’t. We did the trade for the right reason, to get us in the playoffs last year and help us win the playoffs and we did accomplish that to a certain extent. This year it hasn’t worked out,” Luhnow explained.

Astros manager A.J. Hinch says Gomez put too much pressure on himself after being part of a major trade last summer in which Houston traded a few prominent prospects to acquire him from the Milwaukee Brewers. “The harder he tried, sometimes the more difficult it became,” Hinch said. “It wasn’t a lack of effort. It wasn’t a lack of preparation. It wasn’t a lack of anything other than production on the field.”

Without Gomez, Jake Marisnick will be the team’s primary center fielder, although Colby Rasmus could see time there as well when he returns from the DL. As for Gomez, his future remains uncertain, although a team may be willing to give him an audition for the remainder of the season. At age 30, it’s certainly not impossible for him to turn things around and become a productive player again. However, there’s no denying that his struggles this season and the Astros cutting ties with him have been massive setbacks in his career.