How Long Will The Minnesota Vikings Remain Undefeated?

The Minnesota Vikings should suck. They should be absolutely terrible. When you lose your starting quarterback and a superstar running back, you should not do well. Replacing one is possible, but both—not a chance. Even if they did, the team should still not be doing as well as it is. They should be missing Teddy Bridgewater and Adrian Peterson. It should be obvious how important they are to the team—but it isn’t.

They are doing just fine without them, and after dominating the Houston Texans 31-13 Sunday, the Vikings stand alone as the NFL’s lone undefeated team. As dominant as they have been in every game this season, it is hard to wonder who—if anyone—can beat them. However, with how injuries keep piling up, the task may be getting a little easier. 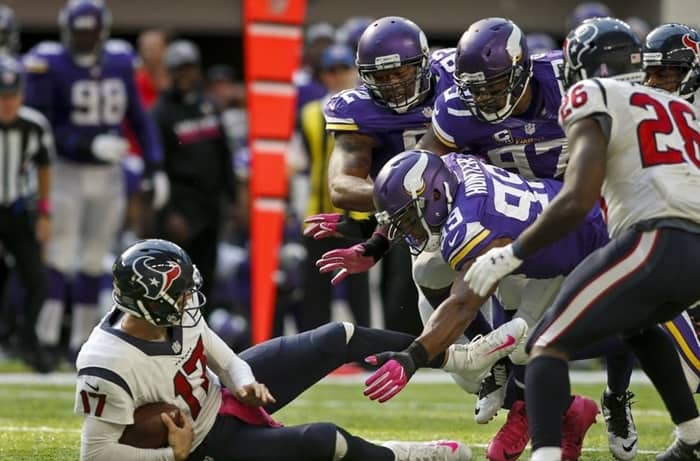 They were able to make up for the loss of Bridgewater with the trade that brought Sam Bradford to town. Initially, the move was met with a lot of skepticism, but Bradford’s success with the offense has won over many of his doubters. But the team still doesn’t have much of a running game, and it hasn’t done the best job of protecting Bradford–who has an extensive injury history. So far he has been sacked eight times and hit 27 times, and his protection is about to get worse.

The offensive line, which was already considered suspect, lost the services of tackle Matt Kalil earlier this season, and it appears that they will now lose the services of their other tackle, Andre Smith. Jake Long has been signed to add some depth to the line, but he has an injury history of his own, and there is a reason why he was available (and it’s not because he is an awesome blocking machine).

In yardage, the Vikings offense is ranked 30th in the league, but when it comes to scoring they are 13th, and they are allowing a league low of 12.6 points a game. Is there a team that can overcome their defense and limit their offense?

When it comes to scenarios like this, it is usually a team that no one would ever expect that brings down the undefeated team. They play their best game of the season, and the undefeated squad plays its worst. Barring that eventuality, who appears to be capable of taking the Vikings down?

Many believe that the Philadelphia Eagles can do the job. Their defense is doing almost as good a job as Minnesota’s; they are just allowing 12.8 points a game. Since the Vikings do not have a running game, they should be able to shut down Sam Bradford.

However, they will be hard-pressed to score against the Vikings. Carson Wentz has done an admirable job so far, but he has yet to play a half-way decent defense. While he has been able to manage the game against the Browns, Bears, and Steelers, he couldn’t overcome the Lions defense. It will not get any easier for him now that Lane Johnson has lost his appeal and will have to serve a 10-game suspension for violating the PED policy.

If Wentz couldn’t beat a team that has allowed 25 points a game, how can we believe he can beat one that is only allowing 12.8?

As strange as it may sound, the Dallas Cowboys may have the best shot at beating the Vikings. Their defense may or may not be able to stop Sam Bradford. If the version that showed up against Cincinnati does they can, but if the one fans have come to know and loath shows up, the Cowboys don’t stand a chance.

If Dallas is going to beat the Vikings, it will be because their massive offensive line will give Ezekiel Elliot enough room to run and they will try to pound the ball all day long. The Cowboys are leading the NFL in rushing with over 155 yards a game. Elliot is leading the NFL in rushing and with 134 yards against the Bengals became just the third rookie in NFL history to rush for 130+ yards in three consecutive games.

Minnesota’s defense is only allowing 77 yards a game (6th in the league) so running on them will not be easy. But if there is any offense that can do it, it’s the Cowboys.

However, the Cowboys will have Tony Romo back behind center when they travel to Minnesota in Week 13. That could be a good thing—but it could also be a bad thing. It all depends on how quickly he can get up to speed, if he can stay healthy enough to be at his best, and if he can keep from throwing any interceptions.