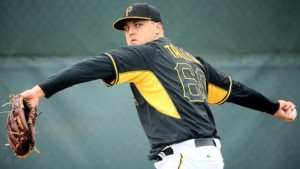 The injury bug has bit the Pittsburgh Pirates once again. On Saturday, the Pirates placed starting pitcher Jameson Taillon on the 10-day DL due to groin discomfort. The Pirates are unsure how Taillon suffered the injury, although he’s coming off his worst start of the season, giving up six runs on eight hits over five innings Wednesday against the Reds. Regardless of how it happened, the Pirates have lost one of their best starting pitchers for the foreseeable future.

“It’s groin discomfort. We didn’t take it any further than that as far as evaluation of where, when, why,” Pirates manager Clint Hurdle explained. “We’ll have more information later in the week when our doctors continue to evaluate him.”

The good news is that the injury appears to be unrelated the hernia surgery Taillon had in 2015. That injury occurred while Taillon was working his way back from Tommy John surgery the previous year and ultimately kept him off the mound for two full seasons. However, he’s managed to recover from both injuries and make strides towards being the frontline starter the Pirates always envisioned him being.

In 18 starts as a rookie last season, Taillon was 5-4 with a 3.38 ERA. He’s been even better this season, appearing to take another big step forward. Prior to his rough outing against the Reds on Wednesday, Taillon had a 2.08 ERA through his first five starts of the season. Having him go to the DL following such a promising start to the season is a disappointing setback for both Taillon and the Pirates.

The Pirates enter Sunday two games under .500, help back in large part due to the absences of Starling Marte due to suspension, Jung Ho Kang for legal reasons, and David Freese and Adam Frazier to injury. As a result, Pittsburgh has become reliant on its pitching staff to carry the team.

The team’s pitching staff has responded, as Taillon, Gerrit Cole, and Ivan Nova have given the Pirates a formidable trio at the top of their rotation. The Pirates have also gotten excellent performances from their bullpen, most notably closer Tony Watson and setup man Felipe Rivero.

However, the loss of Taillon to the DL is a significant loss to the pitching staff that has carried the Pirates this season and at least kept them within striking distance in the NL Central. The Pirates are also taking from their bullpen to plug the hole in their rotation, moving Trevor Williams into the rotation after serving as the long man in the bullpen all season, posting a 5.40 ERA. By doing so, the Pirates are passing on triple-A starters Drew Hutchison and Steven Brault, both of whom have major league experience.

Williams is set to start on Monday night when the Pirates begin a west coast road trip against the Los Angeles Dodgers. Veteran Josh Lindblom has been called up to take Taillon’s spot on the roster. He will pitch out of Pittsburgh’s bullpen and is poised to make his first big league appearance since 2014 after pitching in Korea the past two seasons.

The Pirates don’t have a set timeline for when Taillon will be able to return to the rotation, but the sooner the better. Chad Kuhl and Tyler Glasnow have struggled at the back end of Pittsburgh’s rotation this year, and the Pirates aren’t sure what to expect out of Williams as a starter, leaving Cole and Nova alone to carry the rotation while Taillon is out. Even with three quality starters the Pirates have struggled to stay out of last place in the NL Central this year, and doing so will be that much harder as long as Taillon remains on the sidelines.