The Dallas Cowboys have a problem. It’ a good problem to have but it is also one that if handled poorly could seriously screw the season up and severely anger the fan base. So much that they might defect and start cheering for that team in Houston? Doubtful—but maybe since the current generation of fans hasn’t seen the team excel and the older generation is tired of losing.

It will all depend on how Jerry Jones handles the team’s “problem.” 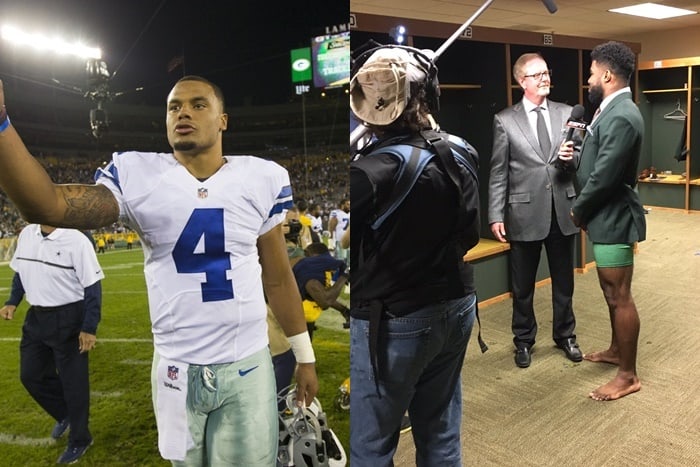 Longtime starting quarterback Tony Romo will soon be ready to make his return to the field after suffering a broken bone in his back during the preseason. Ever since the injury occurred, Jerry Jones has been firm in his commitment to Romo insisting that Romo will get his job back as soon as he is ready.

But when he said it, he probably didn’t think there would be any chance rookie Dak Prescott would be riding a five-game winning streak heading into the bye week. With the team’s back-up QB history, he probably hoped the team would be at best 3-3 and still in position to make a run at the division title.

Instead, his team is 5-1 with a firm grasp on the NFC East lead and looking better than it has in many years. Surprised? Yes.

Okay, but what are you going to do?

“We just want to keep this thing going forward, knowing in the NFL that the wheels could come off at any minute.”

So does that mean he is going to stick with Dak Prescott over a healthy Tony Romo? Jones deflected answering the question, no matter how reporters asked him after Sunday’s win in Green Bay:

“I wouldn’t say unequivocally anything other than we just beat the Green Bay Packers in Green Bay,” Jones said. “That’s great.”

Many think the way Prescott had played before Sunday’s game in Green Bay was enough to earn the job. But after seeing him dismantle the Green Bay defense with relative ease, the bandwagon is starting to get a little full.

He started off well with a touchdown on the opening drive of the game but then punted and set the Packers up with great field position after a fumble. At that point, it looked like bringing Romo back might not be a bad idea. But with a minute left in the first half and 97 yards to pay dirt, Prescott began to make his case yet again.

A few plays and 33 seconds later, he connected with Brice Butler on a 20-yard touchdown pass to make the score 17-6 heading into halftime. When all was said and done, he was 18-27 on the day for 247 yards, three touchdowns and his first career interception (set the record for most pass attempts without an interception to start his career), and Dallas beat the Packers in Green Bay, 30-16.

To be fair, the defense did have a stellar game against Aaron Rodgers, and fellow rookie Ezekiel Elliot made the No. 1 run defense look pretty pedestrian. The Packers had been allowing 1.9 yards a carry. Elliot has 5.6. With that kind of help, who wouldn’t have looked like an All-Pro?

While the defense hasn’t always played well this season, Prescott has received quite a bit of help from fellow rookie, Ezekial Elliot. The team’s first-round pick became the first rookie to run for 130+ yards in four consecutive games with 157 Sunday.

Elliot now leads the NFL with 703 yards rushing in six games. He’s become such a beast he doesn’t even wear pants during his postgame interviews.

So maybe Prescott is a product of the improved defense, and Elliot and Romo will do just as good, if not better. But Prescott has been without Dez Bryant most of the time and one of this best offensive lineman for two games (Tyron Smith). The defense has missed several guys due to suspension and injuries as well.

Can Jerry Jones say Tony Romo would have done the same thing? Would he have the offense working so well with everyone else that it would be the No. 2 unit in the NFL?

We’ll never know if he doesn’t play—but do fans really want to find out?

The answer should be pretty obvious.