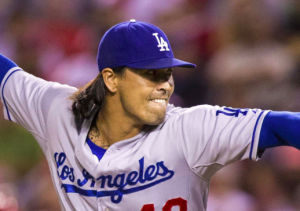 Just one year removed from a World Series championship, the Kansas City Royals are in a difficult position. The Royals have done their best to keep together the group of players that delivered a championship in 2015, but it’s been difficult to do so with the payroll restrictions the team faces. Kansas City is attempting to acquire young, controllable pitchers who can help keep them under budget, something they did by trading Jarrod Dyson to the Mariners for Nathan Karns. But another tactic the Royals are using is taking a chance on several veteran pitchers who are hoping to reignite their careers.

Kansas City’s biggest strength in recent years has been a deep and dominant bullpen. But keeping that group together has proved difficult. After the 2015 season, the Royals lost Ryan Madson and Franklin Morales to free agency, as well as Greg Holland, who missed all of 2016 due to injury and is now on the free agent market. This offseason, payroll issues have forced the Royals to trade Wade Davis to the Cubs for Jorge Soler. Kansas City is also poised to lose Luke Hochevar in free agency.

Those are some heavy losses over the span of just two winters, leaving Kansas City’s bullpen with some vacancies that the Royals don’t have the money to fill as they would like. The solution, at least what the Royals hope will be the solution, is a collection of 22 players on minor league contracts receiving an invitation to spring training, including several pitchers with major league experience looking for a second or third chance. The Royals are optimistic that at least a couple of those pitchers can factor into their bullpen in 2017.

Brandon League is arguably the biggest name on the list of non-roster invitees. League has not pitched in the majors since 2014, as he’s battled shoulder issues the past two years. However, he posted a 2.57 ERA with the Dodgers in 2014 and has experience as a closer. League has had an up and down career, but he has the stuff to be a competent middle reliever or setup man if healthy.

Bobby Parnell is another pitcher to watch. After emerging as the Mets closer, Parnell was forced to undergo Tommy John Surgery early in the 2014 season. He wasn’t the same after returning in 2015 and struggled again during a brief stint with the Tigers last year. Nevertheless, Parnell is just 32 and if he returns to full health, he can be a solid setup man.

Al Alburquerque may be a safe bet to contribute to the Royals this season. The Angels didn’t give him much of a chance last season, but the 30-year old posted solid numbers with the Tigers earlier in his career, including a 2.51 ERA in 2014, so he figures to have plenty left in the tank.

One final name to watch is Chris Withrow, who missed all of 2015 due to Tommy John surgery but pitched well at times for the Braves in 2016. At this point, Withrow should be fully recovered from the surgery, and if he can remain healthy, the former first round pick is talented enough to become a steady contributor to a major league bullpen.

Of those four veteran pitchers, the Royals are hoping to catch some lightning in a bottle and find some relatively cheap relief pitchers who can contribute out of the bullpen in 2017. Obviously, there’s no way to guarantee with any of the veterans the Royals are inviting to spring training will end up contributing. But with the current state of its bullpen, Kansas City is going to need at least a couple of its non-roster invitees to emerge as reliable bullpen pieces in 2017.