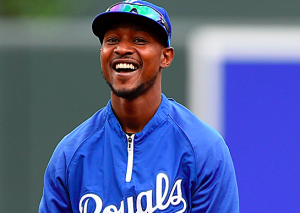 Seattle Mariners GM Jerry Dipoto has been one of the busiest men in baseball this winter, as the Mariners have made one trade after another throughout the offseason. Just hours after completing a trade on Friday to acquire Yovani Gallardo for Seth Smith, the Mariners made a second trade to help replace Smith in their outfield. In another one-for-one-swap, Seattle acquired outfielder Jarrod Dyson from the Kansas City Royals for pitcher Nathan Karns.

“Jarrod brings us a winning pedigree, along with elite level defense and baserunning,” Dipoto said about the acquisition. “He joins players like Leonys Martin and Jean Segura in creating a disruptive element on the bases to our offensive game, while also enhancing our ability to prevent runs on defense.”

Dyson has spent most of his career in center field, but with Martin entrenched at that position in Seattle, he figures to play a corner outfield spot with the Mariners. After trading Smith earlier in the day, the Mariners figured to make Ben Gamel a regular in left field, with Mitch Haniger the most likely option in right field. However, Dyson will have the opportunity to win the starting job at either spot, and if nothing else, he should be part of a platoon with Haniger in right field.

Dyson is coming off the best season of his career, hitting .278 with a .728 OPS and 30 stolen bases in 2016. He’s also an exceptional defensive player who covers a lot of ground in the outfield. The caveat is that he has just one year left on his contract before hitting free agency, so Dipoto made the move with the hope that Dyson can help the Mariners compete in 2017.

Meanwhile, Karns became expendable after the acquisition of Gallardo, which added depth to Seattle’s rotation. Karns made 15 starts for the Mariners last year before transitioning to a bullpen role. He went to the DL in late July with a lower back injury and never returned. However, the Royals are satisfied with medical reports on him and don’t believe the back injury will be an issue moving forward.

Karns will now compete with Chris Young, Matt Strahm, and Mike Minor for the final spot in Kansas City’s rotation. However, it’s more likely that he will contribute out of the bullpen. “(Karns) has a power arm that is hard to come by,” Royals GM Dayton Moore said. “It’s an arm that could translate to the bullpen as well.” The Royals also like the fact that he’s under team control through the 2020 season, as Kansas City is hoping to accumulate as many young, controllable arms as possible.

As for Dyson, despite being a fan favorite in Kansas City, he became expendable in such a crowded outfield. With the acquisition of Jorge Soler in a trade for Wade Davis last month, Dyson would have been the fourth or fifth outfielder on Kansas City’s roster, and so the move to Seattle gives him the opportunity to get regular playing time in a contract year. That being said, the Royals will miss him. “He’s been a great leader for us,” Moore said. “He is valued very highly in the industry. His stolen-base ratio was always very high and he was a great defender.”

Much like Seattle’s trade earlier in the day, this deal appears to be a win for both teams. The Royals needed to trade one of their excess outfielders, and they reportedly had their eye on Karns for some time, so they should be pleased to get him. As for the Mariners, replacing Smith in their outfield with Dyson should be seen as an upgrade. Dyson provides great speed and defense and a more reliable player in case Gamel or Haniger don’t pan out.