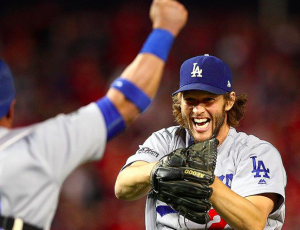 Game 5 of the NLDS between the Washington Nationals and Los Angeles Dodgers was everything we could have hoped for, and more. To be fair, there may have been a few too many pitching changes on the part of the Nationals, who ended up on the short side of things. However, somewhat ironically, it was one unexpected pitching change in the bottom of the 9th that helped the Dodgers secure a win and advance to the NLCS to face the Chicago Cubs.

The one thing both managers knew coming into Game 5 was that lefty Clayton Kershaw would not be available to pitch just two days after starting Game 4 and helping Los Angeles force a Game 5. But desperate times call for desperate measures, and after Dodgers manager Dave Roberts was forced to insert closer Kenley Jansen into Game 5 in the 7th inning, Kershaw became an option, and when called upon, he delivered.

After Jansen retired the Nationals in the bottom of the 8th, keeping the Dodgers ahead by a slim 4-3 margin, Kershaw slowly walked from the dugout to the bullpen, the first indication that Kershaw may do the unexpected.

“I came to [Roberts], you know, once Kenley went out there in the seventh,” Kershaw explained after the game. “I was just kind of doing the math. I don’t think Kenley’s ever done a six-out save, let alone a nine-out save. He threw 20 pitches in that seventh inning, and I just said, ‘I’m going to go get loose, see how I feel and I’ll let you know, but I might be able to do this.’ That’s kind of what happened.”

Jansen managed to record one out in the 9th, but was clearly out of gas after throwing a career-high 51 pitches. With runners on first and second, Kershaw entered to face Daniel Murphy, a man who almost single handedly eliminated the Dodgers from the NLDS last season and continued to be a thorn in their side this postseason. But Kershaw knew all along that if he entered the game it would be to face Murphy, and so he was ready. Kershaw managed to induce a harmless pop up from the MVP candidate and then strikeout pinch hitter Wilmer Difo to close out the game and the series for the Dodgers.

It was just the second save of Kershaw’s professional career. His first came in the Gulf Coast League in 2006, the year the Dodgers drafted him. Serving as his catcher on the day was Jansen, who was equal parts exhausted and relieved following the game, not to mention grateful that Kershaw was able to close out the game for him. “I’m like, wait a minute, am I dreaming right now?” he said after the game. “It’s an awesome feeling to know the best pitcher in the game has your back.”

Even those on the losing side of things could appreciate the circumstances in which the game ended. “That’s probably one of the craziest, if not the craziest, games I’ve ever been a part of in my career,” said Washington starter Max Scherzer, who pitched six spectacular innings, but gave up a home run to Joc Pederson to begin what turned into a four-run 7th inning for the Dodgers. “Man, this is a tough one to be on the wrong side of.”

After surviving Game 5, the Dodgers now advance to the NLCS to face the Cubs. Game 1 is Saturday night in Chicago. After his heroics Thursday night, Kershaw will not be starting Game 1 of the NLCS, according to Roberts. Kenta Maeda will start for the Dodgers, as they look to surprise the heavily favored Cubs.