LeGarrette Blount May Be The Odd Man Out In New England 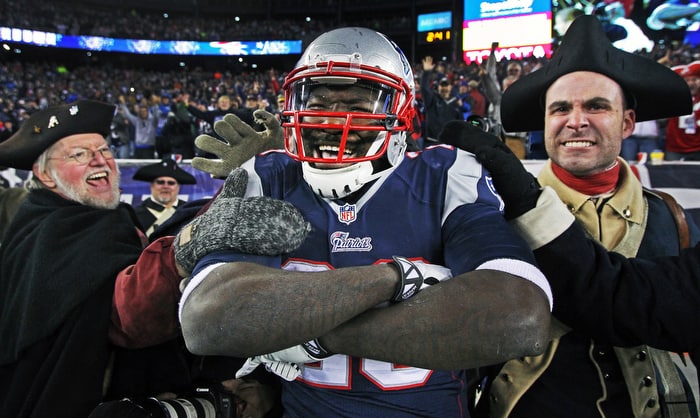 For the New England Patriots, the only position that has not been interchangeable has been the quarterback. The running backs and wide receivers could be just about anyone; Tom Brady just needed bodies. However, with Tom Brady missing the first four games of the season, the ‘bodies’ that line up at receiver and running back are going to be pretty darn important.

Bill Belichick will need to surround Jimmy Garappolo with the best playmakers the team can muster. Even though he the team in rushing last season (703; the team had 1404 total), there is a good chance LeGarrette Blount will not be among those playmakers.

The Patriots have been the definition of running back by committee in recent years and haven’t featured a single running back in years. Instead, they have chosen to collect decent players that specialize in certain situations.

Blount is a great example. At 250 pounds he definitely qualifies as a big back capable of gaining the hard yards, but athletic enough to break off some big gains in the open field. Last season, Dion Lewis appeared to be an absolute steal in free agency and a dangerous receiving threat out of the backfield.

Since Blount seems to be the perfect short-yardage running back, why on Earth would he be the odd man out for the Patriots? The team has certainly benefitted from his presence on the roster in the past. However, if he is not healthy, ready to go, and willing to put the work in, he may not be worth keeping around.

He’s played well, but he hasn’t played that well–at least not on a consistent basis.

If they were to cut him loose, the Patriots would likely give Dion Lewis a few more carries along with James White and Brandon Bolden. As valuable as Lewis was last year in the passing game it is more likely White and Bolden would pick up more carries than him.

Last year the duo combined for 85 carries and 263 yards.

For that reason alone, it would be foolish for the Patriots to cut Blount loose if he is healthy. He is the most experienced running back the team has, and when he is healthy has proven himself to be quite capable.

However, if he isn’t able to play, he becomes the expendable crew member. The Patriots currently have eight running backs on the roster, nine if you count fullback James Develin. So they certainly have more than enough bodies on the roster. If Blount isn’t ready to go, the Patriots have plenty of guys that will be.

Lewis, James White, and Brandon Bolden are probably safe, but since the highest paid of the entire bunch only makes $1.3 million next year any of them could be expendable if the team really needs a roster spot. So if Blount wants to be on the roster come Week One, he may need to not only get healthy but give the Patriots a reason to keep him during the preseason.