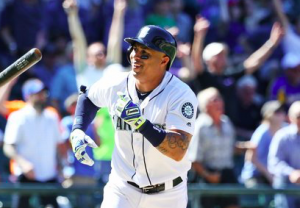 In a surprise move made by the struggling Seattle Mariners, the team has designated starting center fielder Leonys Martin for assignment. Martin has gotten off to a dreadful start this season but remained the every day center fielder until being left on the bench for games Friday and Saturday, both losses to the Oakland A’s. He was informed by the team following Saturday’s game that he was being let go. The Mariners have called up first baseman Dan Vogelbach to fill Martin’s spot on the roster.

In 15 games this season, Martin was hitting .111 with just one extra-base hits and 14 strikeouts. Even though Martin was hitting down in the order, the Mariners were unwilling to be patient with the 29-year old Cuban, who contributed 15 home runs, 17 doubles, and 24 stolen bases last season. Martin has also been a solid center fielder throughout much of his big league career, although defensive metrics showed some signs of decline in 2016.

With Martin out of the picture, the Mariners can slide Jarrod Dyson over to center field full time. Dyson hasn’t fared much better than Martin this season, hitting .242 with a .600 OPS. However, he’s coming off a career year and should be motivated to produce as he approaches free agency next winter. Rookie Guillermo Heredia now has a chance to become Seattle’s every day left fielder. Heredia has had limited at-bats this season, but he’s 7 for 22 with an .828 OPS.

Meanwhile, Vogelbach has a chance to take over of the playing time at first base after starting the season at triple-A. Danny Valencia has been Seattle’s primary first baseman this year, but he’s hitting just .145. Vogelbach was hitting .309 with an .882 OPS early in the season at triple-A, giving the Mariners the option of bringing him back to the majors. Valencia figures to start at first base against lefties, but Vogelbach should get a majority of the playing time at first if he can be productive.

As for Martin, with a $4.85 million salary this season and a .111 batting average, there’s a chance he clears waivers, allowing the Mariners to keep him in the organization and send him to triple-A. However, there may be enough interest in him for Seattle to swing a trade if he’s not claimed off waivers. The Tigers, Giants, and Pirates could all be potential landing spots for Martin.

The Tigers began the season with uncertainty in center field and recently placed young outfielder JaCoby Jones on the DL. It’s possible the Tigers see Martin as a potential solution, as Jones was struggling to hit before his injury, and Mikie Mahtook hasn’t been much better.

The Giants definitely look like a team in need of outfield help and could consider Martin. San Francisco has struggled to find any production coming out of left field this year. Meanwhile, center fielder Denard Span has struggled with injuries early in the season despite avoiding a trip to the DL. Martin could give the Giants protection for Span and another candidate in left field.

Finally, the Pirates may be looking for outfield help after losing Starling Marte to an 80-game suspension. Pittsburgh lacks outfield depth and could certainly use a player like Martin during Marte’s absence, even if he only ends up being a part-time player splitting time with Adam Frazier and Pittsburgh’s other internal options to replace Marte.

On the surface, the Mariners parting ways with Martin less than three weeks into the season may seem rash, but Seattle began the season 7-12, and so a major shakeup may have been necessary to wake the team up. Some may see Martin as being unfairly punished for a few bad weeks, but it’s not as if he’s been a dynamic offensive player throughout his career. The good news for Martin is there should be enough of interest in him to land on his feet with another major league team.