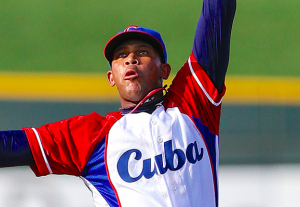 The Los Angeles Dodgers may have just solved their quandary at second base. On Monday, the Dodgers finalized a deal with Cuban infielder Jose Miguel Fernandez, who was a standout performer during the 2013 World Baseball Classic. While officially a minor league deal, the agreement comes with a $200,000 signing bonus for Fernandez, 28, who is believed to be a near major-league-ready player.

Fernandez, like many Cuban players, had to defect from his homeland in order to sign with a major league club. He defected from Cuba in December 2015 and was given the freedom by Major League Baseball to sign with a team last April. The San Diego Padres were long considered the favorites to sign Fernandez, with the Oakland Athletics also showing considerable interest. But in the end, Fernandez signs with the Dodgers, a team with a long history with Cuban players, most notably Yasiel Puig.

In April 2015, prior to his defection, Baseball America rated Fernandez, who hits left-handed but throws right-handed, as the third best prospect in Cuba. He was praised for his plate discipline and approach, as well as his ability to hit for a high average. However, his power, base running, and defense all graded out as below average. But those weaknesses in his game did not prevent him from projecting as a major league caliber player capable of immediately contributing to a big league team.

However, Fernandez has played very little baseball over the past two years. He was suspended for the 2015 season in Cuba as punishment for a previous attempt to defect. He then sat out the entire 2016 season, although he is playing winter ball in the Dominican Republic this year. In 18 games, he’s hitting .286 with a .655 OPS.

Despite playing winter baseball, missing both the 2015 and 2016 seasons entirely will likely force the Dodgers to send Fernandez to the minors at the start of 2017. Nevertheless, he’s considered a finished project, and the clock is obviously ticking on a player who will turn 29 in April. After some time in the minors to shake off the rust, the Dodgers figure to promote Fernandez early in the 2017 season, which brings up the question of whether he is the answer the Dodgers are looking for at second base.

The Dodgers have a few internal options at second base, including Enrique Hernandez, Charlie Culberson, and Micah Johnson, but Los Angeles doesn’t appear satisfied with any of those options, opening the door for Fernandez. Defensively, the Cuban has played third base in winter ball, but may lack the arm strength to play the hot corner in the majors. That spot is also occupied in Los Angeles by Justin Turner, who just re-signed with the Dodgers. Despite questions about his range up the middle, Fernandez should factor into the second base competition this spring, even if he begins the season in the minors.

Of course, the Dodgers are still involved in trade talks involving Brian Dozier. The Dodgers have also been linked to second basemen Logan Forsythe and Ian Kinsler at various times this winter. Chase Utley also remains an unsigned free agent and a fallback option for Los Angeles.

The signing of Fernandez doesn’t necessarily give the Dodgers more clarity at second base, as they are unlikely to drop their pursuit of Dozier or write off Utley. But Fernandez does give them a new and intriguing candidate for the second base job. If nothing else, Fernandez should add a quality hitter to the Los Angeles bench, as well as a player who’s capable of taking over at second base if necessary, making Fernandez a useful signing.