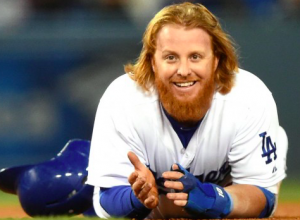 After more than a day of rumors and reports that a deal was close, the Los Angeles Dodgers and third baseman Justin Turner have made it official, well unofficially official at least. Multiple reports citing team officials confirm that Turner has agreed to re-sign with the Dodgers on a four-year deal worth $64 million. The framework of the deal was agreed to on Monday, but the two sides didn’t hammer out all of the details until Tuesday night.

The Long Beach native has had a meteoric rise since coming to Los Angeles after being non-tendered by the New York Mets after the 2013 season. Turner has seen his role with the Dodgers grow in each of the past three seasons, culminating in a 2016 campaign in which he was the team’s every day third baseman and posted career highs in several offensive categories, including hits (153), home runs (27), and RBIs (90). In 151 games in 2016, Turner hit .275 with an OPS of .832.

With Turner being a native of southern California and finally emerging as an offensive force during his time in Los Angeles, the Dodgers were always going to be the favorites to sign him, and Turner was always going to be reluctant to go elsewhere. The Angels and Cardinals were among the other teams that showed interest in Turner. Meanwhile, the Dodgers did consider other options at third base, including a possible trade with the Chicago White Sox for Todd Frazier. But in the end, they chose to bring back Turner, who joins Rich Hill and Kenley Jansen as players the Dodgers re-signed this offseason.

On the surface, committing four years at an average of $16 million per season to the 32-year old Turner, who had little track record of success before coming to Los Angeles, is a bit risky. However, considering his production the past three years, the left-handed heavy lineup the Dodgers currently have, and the veteran leadership Turner brings to the table on a team that is likely to get much younger over the next couple of years, it’s a risk the Dodgers had to take. The team’s familiarity with Turner makes the move a little easier, as it did with both Hill and Jansen.

Even with Turner back in the fold, the Dodgers still have much to do this offseason, most notably address the vacancy at second base. Bringing back Chase Utley is still an option, but not ideal considering his age. The Dodgers have explored a possible trade for Brian Dozier of the Minnesota Twins, although the Twins don’t appear inclined to trade him unless they receive an impressive offer. The Dodgers have also showed interest in Logan Forsythe of the Rays. However, outside of trading for Dozier of Forsythe, there don’t appear to be many appealing options available when it comes to second baseman.

In addition to second base, Los Angeles may look to address its bullpen and outfield, and perhaps its starting rotation as well. This gives the Dodgers plenty left to do this offseason, and that’s after spending a considerable amount of money to re-sign Turner, Jansen, and Hill. Nevertheless, with the signing of Turner, the Dodgers have managed to retain all of their top free agents, which is something they can hang their hat on this winter, even if they still have plenty of work left to do.