Posted on December 12, 2016 by Bryan Zarpentine 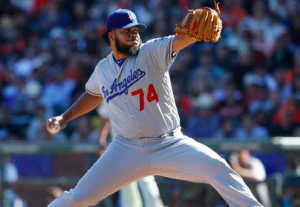 Kenley Jansen has decided to return to the Los Angeles Dodgers. Several outlets are reporting that the Dodgers have agreed to re-sign their closer. The deal will reportedly pay Jansen $80 million over five years, as Jansen will fall a few million dollars short of the record contract fellow closer Aroldis Chapman signed with the Yankees last week.

Jansen is coming off arguably the best season of his career. He also hit the free agent market at a time when relief pitchers are being given significant value. In 2016, Jansen posted a 1.83 ERA, as he recorded a career-high 47 saves in 53 opportunities. He also saved three games during the postseason, during which he struck out 19 in 11.2 innings, including 2.1 shutout innings to help the Dodgers win Game 5 of the NLDS. Jansen also made the all-star team for the first time in 2016 and was given the Trevor Hoffman award for the best reliever in the National League.

The Dodgers don’t have a lot of clarity with regard to the rest of their bullpen, especially with setup man Joe Blanton being a free agent. This made re-signing Jansen all the more important for Los Angeles. Naturally, the Dodgers faced plenty of competition when it came to keeping Jansen, as the Miami Marlins reportedly made a strong push, at one point making him their top priority this offseason. The Washington Nationals also tried to jump in late to sign Jansen, according to reports, after missing out on both Chapman and Mark Melancon.

Jansen signing with the Dodgers is likely to add a great amount of clarity to the free agent market among relief pitchers. He was the last of the three top-tier closers available in free agency this winter, alongside Chapman and Melancon. Teams like the Nationals and Marlins that were unable to land any of the “big three” closers this winter may have to look to the trade market, although Greg Holland is still available for teams willing to take a chance on a pitcher who missed all of 2016 due to injury. The Dodgers reportedly considered Holland as a backup option if they weren’t able to retain Jansen.

On the trade market, David Robertson of the White Sox and Alex Colome of the Rays appear to be the biggest names who may be available. Robertson is likely going to cost a pretty penny, as the White Sox have driven a hard bargain when trading both Chris Sale and Adam Eaton this winter. As for Colome, there’s no indication that the Rays are excited to trade him, but multiple teams, including the Nationals, have reportedly approached them about his availability.

The Dodgers, of course, don’t have to worry about the trade market after locking up Jansen for another five years. It was a move that Los Angeles had to make in order to solidify their bullpen and their chances of repeating as NL West champs in 2017. Of course, one could argue that the Nationals and Marlins were equally desperate to add Jansen, making his return to Los Angeles all the more important.