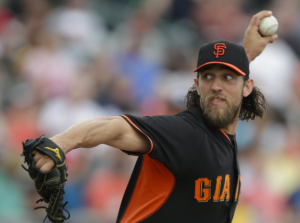 As if things haven’t gone bad enough for the San Francisco Giants early in the 2017 season, things are about to get much worse. While trying to enjoy his off day in Denver on Thursday, San Francisco ace Madison Bumgarner suffered serious injuries in a dirt biking accident.

Exact details of the incident are still tricking in, but Bumgarner was briefly hospitalized. He has since been released and is reportedly resting at the team’s hotel, as the Giants begin a three-game series with the Rockies. Bumgarner has been diagnosed with bruised ribs and a sprain of the AC joint in his left shoulder. The Giants have not given a timeline for Bumgarner’s return, as he will be re-evaluated after the team returns to San Francisco next week. However, Ken Rosenthal reports the lefty will miss at least six to eight weeks.

“Here’s a young guy who, like a lot of us, thinks you’re invincible,” Giants manager Bruce Bochy said Friday before the club’s game against the Rockies. “He was having some fun and he hit a slippery spot and went down.”

Bochy says that Bumgarner, who was not with any of his teammates when the accident occurred, was able to get himself back to the team’s hotel, where he called Giants trainer Dave Groeschner, who took Bumgarner to the hospital to be examined.

“If I was there, sure, I wouldn’t have let him on the bike,” Bochy said. “I’m sure looking back, Madison wishes he hadn’t gone on. He was remorseful. Hopefully this is a lesson learned throughout our club and sports, that you’ve got to be careful.”

It’s unclear if Bumgarner has a clause in his contract preventing him riding dirt bikes, which is common for pro athletes. However, the Giants have said they don’t plan to punish him for the incident, even if his contract allows them to do so.

Bumgarner is not expected to address the media until next week, at which point more details should emerge. In the meantime, several Giants have commented that the situation could have been much worse for the pitcher who has helped San Francisco win three World Series titles.

“The main thing here is to be grateful he’s not hurt worse than he is,” catcher Buster Posey said Friday after the team was informed of the details of Bumgarner’s accident in a closed-door meeting. “You have to look at that. We’re thankful he’s not hurt any worse.”

The Giants are now faced with the task of replacing Bumgarner for the foreseeable future. Bumgarner hasn’t quite been his dominant self this season, as he’s 0-3 with a 3.00 ERA through his first four starts of the season. However, he’s been the team’s best starter thus far, and it’s usually only a matter of time until Bumgarner starts throwing like one of the elite pitchers in baseball.

San Francisco has called up Chris Stratton to pitch out of the bullpen while Ty Blach will be moved to the rotation to replace Bumgarner. Blach has been off and on while pitching out of the bullpen this year, but he closed last season with eight shutout innings against the Dodgers in early October, so he certainly has the potential to be a quality major league starter.

Of course, even if Blach proves to be a competent fill-in, anyone the Giants send to the mound will be a step down from Bumgarner. Moreover, with the Giants entering Friday at 6-10 and last place in the NL West, Bumgarner’s injury couldn’t have come at a worse time, as the team tries to pull itself out of last place and avoid falling too far behind early in the season. Fortunately, with the Giants experiencing so much success in recent years, the team is unlikely to panic in the face of adversity.

“Baseball is the type of sport where sometimes if you try to do more it works against you,” says Posey. “I do believe you can intensify your focus, but there’s a line you’ve got to go up to and not go over.”