Posted on December 17, 2016 by Bryan Zarpentine 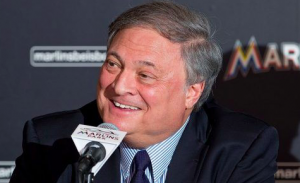 There are rumblings out of South Florida that Miami Marlins owner Jeffrey Loria is at least open to the possibility of selling the team. Nothing is imminent, and at the moment, Loria can best be described as open-minded about selling, but there does appear to be outside interest in purchasing the team, making it something to keep an eye on in the months to come.

An article from Forbes published earlier this week mentions a “buzz among sports bankers” that Loria would consider selling the Marlins if the price is right. The Forbes article mentions Loria being uninterested in selling when approached about doing so within the past couple of years. However, there is reason to believe that Loria would consider selling if the price in his head is met. That price appears to be $1.7 billion.

It’s important to note that Forbes valued the Marlins last March at a mere $675 million, making them 29th out of 30 MLB teams in terms of value, with only the Tampa Bay Rays being worth less. That price includes the cost of using Marlins Park, which is technically owned by Miami-Dade country, although the team handles all stadium operations. That would make Loria’s apparent asking price of $1.7 billion quite lofty, perhaps even unrealistic.

Marlins president David Samson declined to comment on the possibility of Loria selling the team while speaking to reporters at a team charity event on Friday. “There are so many rumors all the time, we really don’t address them,” Samson said. “There’s a lot of people who want to own a Major League Baseball team around the country. Over 17 years, you hear from a lot of people. But nothing different than normal.”

Loria has reportedly received multiple offers to buy the Marlins within the past year, although neither bid reached $1.7 billion and so neither resulted in a sale. There are also reports that one of the potential buyers could make an offer of $1.3 billion, which would not reach the price that Loria is asking, but it may also be the most he could expect to get for the Marlins if he does indeed wish to sell.

Naturally, there are a number of variables involved in a potential sale of the team. The Marlins are last in the league in revenue and had the lowest attendance in baseball last season. Miami also has the lowest TV contract in baseball and is planning to sell the naming rights of its stadium to gain some extra revenue. The Marlins would also have to pay money to the country if the team is sold as per their stadium agreement. All of these factors could dissuade potential buyers, at least when it comes to meeting Loria’s rather steep asking price.

How serious Loria is about selling the Marlins, as well as his motivation for doing so remain unclear, and so there is little clarity with this matter. It’s important to keep in mind that an investment firm has not been hired, and until that happens, there is no traction for the team to be sold. Nevertheless, there is enough rumor and speculation in the air indicating that Loria as at least open to the idea of selling the team. If nothing else, it’s a development to watch closely in the months to come just in case Loria receives an offer he can’t refuse.