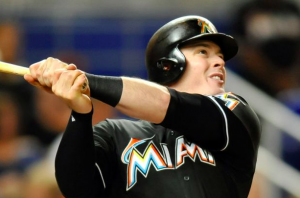 For much of the offseason, the Miami Marlins have had little doubt about the eight position players who are slated to start on opening day for them. Barring injury or an unexpected trade, Miami’s every day lineup in 2017 should look a lot like it did when everyone was healthy in 2016. The only point of uncertainty is whether the Marlins will sign a player to platoon with Justin Bour at first base, but as it stands now, the Marlins are willing to give Bour a chance to be the every day first baseman in 2017.

Bour first came up with the Marlins in 2014, and has since then proven to be a dangerous power hitter, helping to provide a left-handed complement to Giancarlo Stanton in the middle of Miami’s lineup. In 2015, he chipped in 23 home runs and an OPS of .800 in 123 games. However, a high ankle sprain kept him sidelined for more than two months in 2016. He was limited to 90 games but still managed to hit 15 home runs as a platoon player at first base. The constant threat of power that Bour provides now has the Marlins considering him as a full-time player.

However, Bour has just 103 career at bats against left-handed pitchers during his time in the majors. He’s also yet to hit a home run against a lefty. Nevertheless, allowing Bour to play every day against both righties and lefties is under consideration. “We’ve talked about trying to challenge him more and expose him more to left-handed pitching,” said Marlins president of baseball operations Michael Hill.

Part of what is driving the Marlins to consider Bour in an every day role is the lack of a platoon partner on their roster. Miami had Chris Johnson serving as the right-handed to complement to Bour for much of last season, but he remains a free agent after a disappointing 2016 season. The primary backup at first base at the moment is Derek Dietrich, another left-handed hitter. Other than trying out catcher J.T. Realmuto at first base, the Marlins have no right-handed complement for Bour on their current roster.

Of course, as Hill points out: “There still is a lot of offseason left,” adding, “We will continue to monitor the market and see what’s out there.” However, there are not many options available on the free agent market. Miami wasn’t a serious contender for Edwin Encarnacion, nor do the Marlins appear to be in contention for Mike Napoli or Mark Trumbo. Chris Carter and Mark Reynolds are two of the few right-handed first baseman still available in free agency, and both may be out of Miami’s price range.

Moreover, there is reason to believe that the Marlins are finished making meaningful moves this offseason, making it unlikely they’ll make a serious effort to sign a right-hand hitting first baseman. The only option at this point may be Tyler Moore, who is going to spring training with the Marlins on a minor league deal. However, Moore did not play in the majors last season and he’s a career .228 hitter in the big leagues, so it would seem unlikely that he’ll make the opening day roster.

This makes it all the more likely that Bour will be the every day first baseman for the Marlins in 2017, giving him the chance to play against both righties and lefties. The Marlins appear open to this idea right now, but with little experience and little success against lefties in his big league career, Bour has much to prove if he’s going to be an every day player.