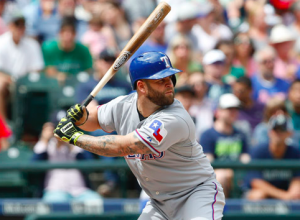 Mike Napoli is returning to the Texas Rangers, again. After several weeks of negotiations, MLB.com is reporting that Napoli and the Rangers have reached an agreement on a one-year deal, with Napoli joining the Rangers for his third stint with the team. Napoli will reportedly make $8.5 million in 2017, falling well short of his expectations heading into the offseason.

The Rangers have not yet confirmed the deal, which may not become official until next week. Texas will have to remove a player from the team’s 40-man roster in order to make room for Napoli. It’s been speculated that the Rangers will wait to officially add Napoli until February 14, which is the first day they can add injured players to the 60-day DL. Jake Diekman, who will miss the first half of the season following stomach surgery last month, and Prince Fielder, who was forced into retirement last year, are both likely to be moved to the 60-day DL as soon as possible.

Napoli’s first stint with the Rangers was in 2011 and 2012 after being traded to Texas following a trade from the Angels to the Blue Jays four days earlier. He had the best season of his career in 2011, posting a 1.046 OPS while helping the Rangers reach the World Series.

After two years in Texas, Napoli signed a three-year deal with the Boston Red Sox prior to the 2013 season. In August 2015, the Red Sox traded him back to the Rangers. Napoli then signed a one-year deal with the Cleveland Indians last offseason, helping them to reach the World Series before hitting the free agent market again this offseason.

After hitting a career-high 34 home runs last season, Napoli was expecting to be a wanted commodity on the open market this winter. However, he turned out to be one of many power hitters who didn’t receive the kind of interest they were expecting. Despite some interest from other clubs, the Rangers have long been the favorites to sign Napoli.

In his return to Texas, Napoli figures to become the team’s primary first baseman. With Mitch Moreland signing with the Red Sox earlier this offseason, the Rangers had an opening at first base they were otherwise planning to fill with a slew of players with limited experience playing the position. Napoli gives the Rangers a true first baseman, as well as a power hitter who can help make up for the offense Texas is losing due to the departures of Moreland, Ian Desmond, and Carlos Beltran.

However, while Napoli solves the problem at first base for the Rangers, he creates uncertainty for several other players. Joey Gallo and Jurickson Profar were expecting to split time between first base and DH this year, with Ryan Rua also factoring into the equation. With Napoli taking that spot, those players have just one spot in the lineup to share amongst them, which could force a player like Gallo to return to triple-A at the start of the season.

The signing of Napoli will also make it more difficult for Josh Hamilton to make the opening day roster. Hamilton signed a minor league deal with the Rangers last month, as he takes one last chance at playing in the majors. Hamilton will attempt to play first base during spring training, in addition to competing for time at DH. However, with Napoli now part of the equation, it may be harder for Hamilton to find a spot on the roster, much less find regular playing time.

For players like Profar, Gallo, and Hamilton, the addition of Napoli is not the best news, but for the Rangers, the signing is a huge win. Napoli proved last season that he can still be a productive, middle-of-the-order hitter on a winning team, and to sign him on a one-year deal for just $8.5 million is a bargain. He should be a great addition to the offense and provide a veteran presence in the clubhouse on a team that’s hoping to win its third straight AL West crown in 2017.