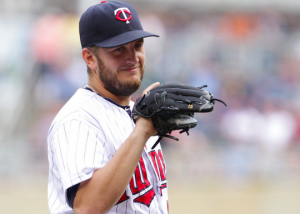 Minnesota Twins closer Glen Perkins has cancelled a bullpen session scheduled for Friday. It was supposed to be his first time throwing off a mound after undergoing shoulder surgery last June to repair damage to his labrum and rotator cuff. Having to postpone the bullpen session is a minor but potentially meaningful setback for Minnesota’s longtime closer, who was hoping to come back healthy in 2017 after throwing just two innings last season before succumbing to shoulder pain.

Accompanying the news that Perkins was pushing back the bullpen session were reports that he felt a “catch” in his shoulder, as he has been throwing off flat ground in recent weeks. However, later reports indicate that Perkins simply wants to take more time to build up his arm strength before throwing off a mound. The lefty admits that he is three weeks behind his usual schedule.

Perkins said in late January that he was feeling good following the surgery and had experienced no setbacks in his rehab to that point. “It feels better than it did before surgery,” he said. “I know that. It feels strong and more stable. I don’t have the sensations I had before the surgery. So far, so good.”

At that time, Perkins said he was roughly a week away from throwing off a mound, adding that he would likely throw four bullpen sessions before the official start of spring training. That was now 10 days ago, and after cancelling Friday’s bullpen session, it’s hard to envision Perkins being ready by the start of the regular season, meaning he will most likely begin 2017 on the DL.

Perkins has previously acknowledged that the shoulder surgery he had last year could be career ending. “When you throw baseballs at 96 or 97 mph for four years, you don’t come out of it healthy,” he said in late January. “I’ve done everything I can to rehab this. Hopefully, it means I can have success and be healthy. There [are] no guarantees, but I know I’ve given it all I have, so far.”

Before Thursday’s minor setback, Perkins, a three-time all-star, said his only goal for 2017 was to be healthy. “My goal isn’t to make an All-Star team or have a zero ERA, I just want to be healthy,” he said in January. “I want to throw and not have my shoulder hurt or my back hurt. I have [no] goals other than to be healthy.”

With Perkins likely to start the season on the DL, Brandon Kintzler figures to be the team’s closer. Kintzler saved 17 games for the Twins last season after Perkins went down with the shoulder injury. If and when Perkins returns to the majors, he may have difficulty pitching on back-to-back days, meaning Kintzler could remain in the closer’s role until Perkins proves he’s ready to take back the job full time.

Minnesota’s front office has indicated that addressing the bullpen is a priority at this stage of the offseason. The Twins have signed 36-year old Matt Belisle, who is coming off the best season of his career. However, Minnesota’s front office may need to do more to help a bullpen that was the worst in the American League last year, especially now that they know Perkins’ return will be delayed following Thursday’s setback.